Encouraged by your comments after my last post of random topics, I’ve decided to bless you with allow myself a totally random blog post every once in a while. So, I randomly chose today to write again about some of our random activities…

1. I finally finished looking through curriculum catalogs, made my list, checked it twice, then a third time, and then placed my orders. I finally just had to close the catalogs and put them away so that I would quit finding more and more awesome books that I wanted to order. Tomorrow I’ll share our list of books with you!!!

2. Tuesday we picked up our Azure Standard order for the month…but not without a little drama. The truck driver called me Monday (because I’m the top of our group’s calling tree) to tell me that he would be at the Walmart parking lot on Tuesday at 9:15 am. I called everyone, then we all met at the appointed time. Then he never showed up. Turns out, his truck had broken down and he had called to tell me that he would be late…but I missed the call somehow. Bummer. So, we finally figured it all out and went home…and then came back to pick up our order that evening after his truck was working again. Poor guy.

Anyway…just in case you’d like to stare at my groceries for a while…here you go: 3. I’ve taken the time to read a few Karen Kingsbury books during the past couple of weeks. I usually don’t really have much time to read, but with school starting soon, I decided to allow myself a little chill time. So, I went to the library and checked out some good reads, then neglected a bunch of housework for a few days so that I could enjoy some books.

5. Malachi is totally into microphones, and creates one out of anything he has in his hands. I have been interviewed by and asked to sing into many a Lincoln Log lately. Last week at a garage sale, we found a real toy microphone for 50 cents. You would have thought we gave him the moon.

6. Let’s just take another look at that box of penne pasta. Now that’s a lot of pasta. 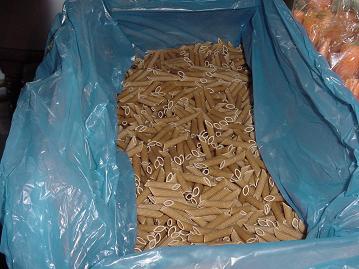 8. When I was a little girl I got one of those “Doll Head” thingies that sat on a little stand so that you could fix her hair and make-up. You know what I’m talking about? Well, I enjoyed it thoroughly for about two weeks…and then my brother used the lip stick pencil and drew a thick, bright pink line from the top of her forehead to the bottom of her neck. He truly thought that it would scrub right off, but it never, ever did. Ever. But I’m over it now.

9. Asa and Justus are in a musical that the city is putting on this summer, Joseph and the Amazing Technicolor Dreamcoat. They are in the children’s choir and are having such a wonderful experience. Anybody ever seen this musical before?

10. I think it’s weird that we call small towns like the one I live in a “city”.

11. Last Friday I let each of my boys pick one friend to take to the bowling alley. (Remember the free bowling passes we have?)  Matt wasn’t able to go with me, so it was just me and the boys. Now, let’s do the math (and try to figure out WHAT in the world I was thinking when I made this plan). I have four boys of my own, and each of them chose one boy to take along. That equals a total of eight boys…ages as follows:  three, three, five, six, eight, nine, eleven and twelve. How many arms did I think I had? Simply figuring out who needed what shoe size at the beginning was just about enough to make me turn around and go home. At least the no smoking ban has officially been put into place this time, so we did not come out smelling like the deep fat fried cigarettes we smelled like last time we were there.

12. I should not continue to come up with random thoughts at 11:32 pm. Especially when I need to get up and bake for the farmer’s market tomorrow.

13. We keep getting rain and other severe weather right when it’s farmer’s market time. I like the rain, but not when I’m trying to sell pretzels.

15. Seriously, I’ve got to stop. What random things are going on with you?!

I have a few completely random subjects running around in my head. I figured you would just love to hear all about it. :)

1. The very best part about being sick is feeling better afterward. And being incredibly joyful simply because you can put a load of clothes into the washing machine without feeling completely worn out when you’re done.

2. Along those same lines…because I was sick for the better part of two weeks, and then we went on a trip…I’m having a terrible time catching up on everything that needs to be done around here. I do not have a Funky Kitchen…and my Home doesn’t look the least bit Heavenly right now. ;)

3. It doesn’t help that my vacuum isn’t working. And hasn’t been for about a month. The last time I tried to vacuum…I felt pieces of dirt and other unknown objects HITTING my foot! My vacuum was BLOWING AIR OUT instead of sucking stuff in. What is THAT about? So, my vacuum is in the shop, and my floors just keep getting dirtier. Thankfully, most of my main floor is hard wood and we just sweep it…but upstairs is a different story.

4. I have weeds taller than Justus outside in my garden. And he’s been growing like a weed. Now that’s scary.

5. I sent two of my boys outside yesterday to rinse out a couple of big jugs. 45 minutes later they came in soaking wet…the sidewalk had been watered very well…and the jugs were dirtier than they were to begin with. I’m pretty sure they had fun “helping me” though.

6. Last week we killed our friend’s guinea pig. Not on purpose. We were guinea pig sitting and it just so happened that it was “Rosie’s” time to go. I was reminded of several years ago when I was bunny sitting…and the bunny didn’t make it either. You may not want to trust our family with your pets. Just saying.

7. Asa lost his last baby tooth last night. His very last one. I’ve got to stop being in denial about my kids getting older.

8. As I do every July…I’m starting to get REALLY excited about the upcoming school year. We always start in early August…and I’m excited to share more about our schedule and some of the things we do in our home school. You should see my awesome list of books that I want to order! Ooh, I’m getting so excited!!!

9. I’ve heard from several of you that you’re anxious to hear more in my Getting Real With Food series! I’m anxious to share too, now that I’m feeling better. Sorry I haven’t posted any of those for a while. Really and truly, I’ll get back with it next week. What I LOVE is hearing how many of you are working to eat healthier!!! That makes me so excited!

10. I’m baking today for the farmer’s market. I’m writing this as my pretzel dough is rising. My house is about to begin smelling really, really yummy.

11. I had a typo when I first wrote number 10 and wrote “My house is about to begin spelling really, really yummy.” I never knew I had such a smart house.

Okay, enough randomness….I’ve got to go get back to work in the kitchen. And, I do believe that I’ll call the vacuum place to see if my vacuum is almost ready to be picked up.

What are you up to today? Hope you have a great one!

Heavenly Homemaker's Club Members: Access your homepage and all your fantastic resources here! Not a member yet? Please join us!
« Previous Page