First, I need to remind you that if I can kick my Pepsi habit…anyone can. I used to drink a ton of the stuff. While it’s super hard to give it up…I can testify that it is 100% worth it.

Now I mostly just drink water or raw milk (more about raw milk eventually in this series!). But occasionally I do have a few other drinks that I consider to be treats: 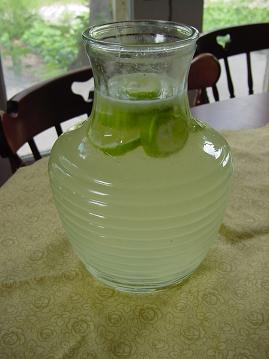 Now, I am excited to share a wonderful comment that my friend Serenity left on a post several months ago. I thought it was so awesome to read about how her husband gave up coffee…and to hear about how much BETTER HE FEELS!!! Here’s what Serentity had to say…

My husband is an RN and had a coffee addiction for YEARS. He finally quit this winter when he got the flu and I can not believe how it has changed him. First, he is no longer tired. He was drinking coffee to stay awake (he works nights) but he has found that without caffeine he is actually much more alert and less tired. Second, right after quitting coffee he felt so good that he started exercising. Now he runs 3 times a week for 4-5 miles and lifts weights twice a week. He looks AWESOME! For the first time in our marriage he jumps out of bed each morning ready to conquer the day. For the past ten years I had been bringing him a cup of coffee every morning to wake him up and I would have to coax him out of bed. I am loving my energetic, motivated husband :)

What are some of your favorite, healthier drinks?

You knew the Coke/Pop/Soda question was coming after this question, didn’t you?

We all know that I don’t drink Pepsi anymore. I’ve been Pepsi free for over four years now. However, I still miss my Pepsi so if you’d all kindly whisper while we talk about this subject, I’d appreciate it. Otherwise this will be a difficult topic and I may be faced with temptation.

However, if you and I are together and you are drinking a Pepsi, I may ask you for a sniff. My sister-in-law always lets me smell her Pepsi when we’re together. She just smiles, shrugs and hands it over…because what else is she supposed to do? She married my brother so she has to love me through my weird Pepsi addicted ways. Ah, everyone should be so blessed as to have a sister-in-law who lets you smell her Pepsi. Michele, I love ya. I can’t wait to smell your Pepsi  sit down for a long visit next month!

So, growing up, I always called sugar filled carbonated beverages ‘pop’. When I went to college, I learned that people from different regions call it different names…names that I (in my immaturity) thought were just plain weird. I thought people only called it ‘soda’ in old movies. Lo and behold, real live people called it ‘soda’ and they weren’t even kidding. And then there were the people that called it ‘Coke’ even if it was a Dr. Pepper or a Sprite…or of all scandalous things…a Pepsi. How dare these people call my beloved Pepsi…a Coke?

Yeah, I’m over it now. In fact, I even started calling it ‘soda’ after a while because everyone around me said it that way. (Although, as a side note, I do get a bit testy when I hear people call ‘margarine’…’butter’. If it’s margarine, it ain’t buttuh. “Don’t you mess with butter’s good name like that,” I scream! In my head. While I smile.)

Well, anyway…I do believe this Coke/Pop/Soda thing is regional. It seems that folks from different parts of the world call it different things. Oh boy, and I even met someone last summer that calls it ‘Soda Pop’. I thought Opie was the only one who called it that…but it sure was cute coming out of the six foot three inch fella I heard it from last summer.

So what do you call it? Have you found it to be different it different areas of the world?