Should you give kids an allowance? That’s a great question with many different opinions! 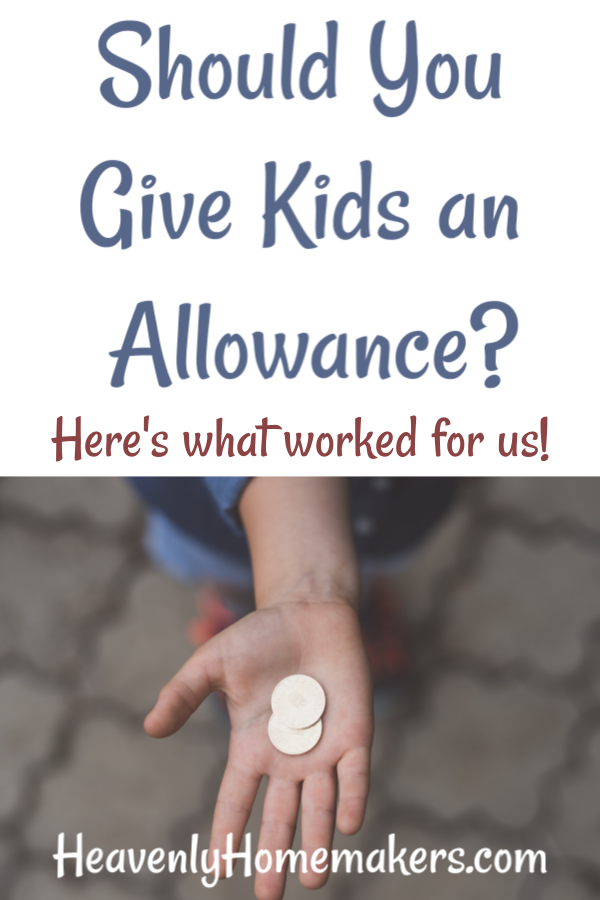 I’m not going to answer with a simple yes or no. But I will share with you what we’ve done!

Why should you listen to my advice? You maybe shouldn’t, simply because every family is different, every kid is different, and there are many ways to handle allowance and teach your kids how to handle money!

My experience spans 22 years of parenting. Our oldest son, the 22-year-old, is a great money manager, as is our 20-year-old, our 18-year-old, and our 15-year-old. Some of them are a little more willing to spend their money on occasional splurges while some of them much prefer more padding in their savings accounts. But what I want to say is this: The way we handled allowance with our kids when they were little and as they became big? It worked.

But ha, there’s more! God blessed us with Bonus Boys!! So we’ll be starting this method all over again with our six-year-old and later when our 1-year-old “comes of age.” Seems it’s a good thing I’m dusting off this old trick so we can use it all over again in a few months! 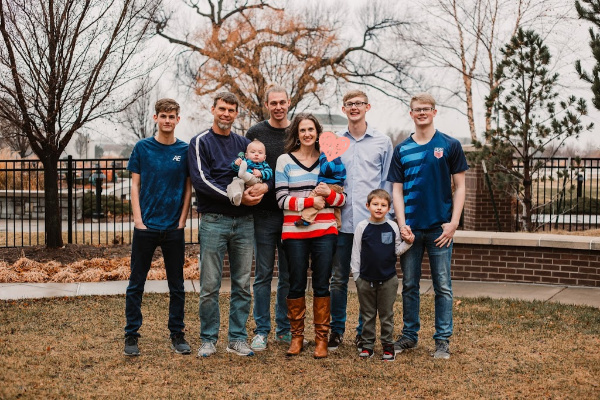 Should You Give Kids an Allowance?

We did give our kids an allowance – for a time.

When they turned the magic age of 7, we started giving our kids a whopping $4/month, which usually equaled $1/week. (By the way, we tried it when our oldest turned 5 but found he was a bit too young to understand saving and spending concepts we were trying to teach.)

We made this allowance-giving experience kind of a big deal by presenting them with a brand new wallet on their 7th birthday. Then we gave them 4 one-dollar bills to put inside their new wallets – beautiful pieces of green to an eager 7-year-old!

While we’d already started talking about simple money spending and saving concepts long before they turned 7 – this is when we started giving them more responsibility and freedom. Why?

So that they could begin to learn how to manage their very own money.

$4 isn’t very much. But we found it didn’t take much to help them learn some basic healthy money skills.

It is worth noting that we didn’t require them to do chores in order to earn this $4 allowance. It was simply a monthly allowance. The chores?? Oh, they did them! They just didn’t get money for them. And they didn’t even know they were called “chores” ha! (I learned this one day when they were at a friend’s house and they shrugged when their friend asked what chores they did at home. “I don’t know. We don’t have chores.” The friends were so jealous…until I cleared it up that my kids helped around the house all day long, we just never called this kind of family teamwork “doing chores.” But anyway…)

We didn’t set up specific guidelines for how they were to go about using their $4 allowance. We simply offered guidance and talked them through options for how they might enjoy their new money freedom.

Every once in awhile, one of our little allowance-receivers would spend a dollar here or there on a dollar store item. This was fine and fun and good for their learning experience too! We always talked about a purchase before taking the plunge!

But I believe they had learned from our example of being more of a saver than a spender. We don’t buy stuff for the sake of buying stuff. And so their money-saving mindset began. 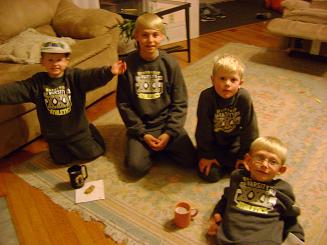 How long did we give our kids allowance?

We gave our kids an allowance until they started earning money in other ways.

About the time $4/month became a laughably small amount to our sons – around the age of 10 or 11 – we continued the monthly allowance. But as soon as they found ways to earn money, the allowance allotment stopped. They didn’t complain about this because they were now able to earn $10 on one Saturday morning by reffing a youth soccer game or by mowing a lawn – so they were getting much more than a tiny $4 allowance!

In addition, by that time, they had learned the very basics of money management – our very reason for giving our kids an allowance. By the time our boys started to find ways to earn money, they had a strong sense of ownership and the beginning of wisdom when it came to saving, giving, and spending.

So should you give kids an allowance?

I can’t give you a firm yes or no. But I will tell you this: We’re glad we did! And we’ll do it again when Brayden turns 7.

At this point, he and I talk often at the store about how we spend our money and how we make purchasing choices. He’s catching on quickly – and as much as he already loves putting coins from our pockets into the offering jars at church (specifically earmarked for children in Ecuador!) – I can’t wait to see how much he loves using his very own money!

How have you handled allowance at your house?