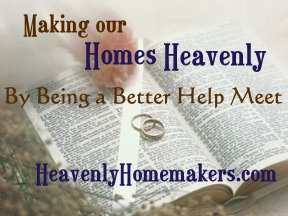 You know how the husband of the Proverbs 31 Woman is “respected at the city gate, where he takes his seat among the elders of the land”?

Why do you suppose he was so highly respected? Because he’s just that cool? Yeah maybe. I’m sure he was a pretty neat guy.

But here’s what I think:

I am not an expert. Nor do I think that the following statement is absolute across the board without exception.

I believe we as women have the power to make or break our man.

Without a doubt, a big part of who a man becomes is completely up to him. You can not change your husband because ultimately he must make his own choices and decide who his God is.

I believe that the way I treat my husband; the way I respect him, talk to him, listen to him and talk to others about him can have a huge impact on the choices he makes and the man he becomes.

I think I could slowly but surely break my man.

I can build him up and make him into more of the man and husband God wants him to be.

These are the some of the things I try to consider about how I talk to my husband or talk to others about my husband:

Hey…I don’t want Matt to talk to the guys about what a dork I was when I forgot to pick up the stuff he asked me to pick up at the store yesterday. I don’t want him to gripe to his buddies about how annoying I am when I leave cabinet doors open time after time. Why in the world would I think it would be okay for me to whine and gripe about him to my friends?

Now…is it ever okay to vent to a friend and share concerns in your marriage? Absolutely. I think women sharing with women can be healthy and helpful. But I think it is VERY important to pray about it first and consider the outcome of the conversation. You want your friends (and family) to still have respect for your husband after your conversation. Speak wisely.

Challenge Yourself:  What are some ways you might need to improve when it comes to talking respectfully to or about your husband? Would your husband “be respected at the city gate” (Prov. 31:23)? (You’re welcome to share your thoughts on this too…but please don’t feel like you have to. This is more for your reflection and prayer.)
————————————————-

This post is linked to Works for me Wednesday.