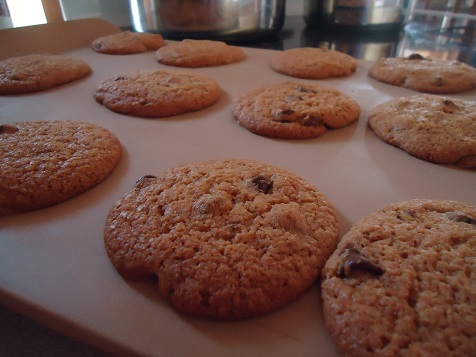 I think I was about eleven years old at the time. I was baking chocolate chip cookies – all by myself. It was something I’d been doing since I was about nine, and my mom had confidently turned over all cookie baking jobs to me at that point.

As I reached in to pull the pan of cookies from the oven that day, somehow my right arm brushed the inside of the oven. Ouch! I’d had little burns before, but this one was a biggie. Or so it seemed at the time.

Mom helped me try to find some relief for the burn as she finished up the cookie baking chore. I remember being in a lot of pain – and feeling really frustrated with myself. How could I have been so dumb? It is not hard to take cookies out of the oven without burning yourself. Why hadn’t I just slowed down and done it right? I must  not be a very good cook, I woefully lamented to myself.

Later that day, my grandma came over to drop something off. She took a look at the burn on my arm, winced sympathetically, and said, “Ah, the sign of a good cook…”

What? Good cook?!  I had been thinking exactly the opposite. As I got teary eyed, Grandma continued, “Laura, every good cook I know burns herself every once in a while. It’s not fun, but it means that you’re working hard to help feed your family. Take care of your burn, then get back in the kitchen and keep on cooking.”

It’s a good thing my grandma gave me that advice. Otherwise, my husband and sons would be pretty hungry by now. Just kidding. I’m sure I would have found my way back into the kitchen eventually. But Grandma’s words dried my tears, and got me off the couch and back into the kitchen that very day.

Every good cook burns herself sometimes. Every homemaker occasionally flings a spoonful of flour into the jar of salt. (As in, I did this just last Wednesday.)  Sometimes, when you open the refrigerator, the plastic bottle of ketchup will fall to the floor, break, and shoot ketchup all the way into the living room, up your pantleg, and into the leftover pie. (Again, last Wednesday.)

Every parent says the wrong thing to her child at one time or another. Every person puts his foot in his mouth occasionally. Everyone who has ever done laundry has found that a red shirt with a white sock will create a pretty shade of pink. Or in my case, I learned that my green kitchen rug would turn my light blue guest towels the color of puke. (If only Grandma could have come over that day.)

Afraid of failing? Nervous about trying something new? Scared that you don’t know enough about cooking, serving, parenting, homemaking, working, or you know…taking cookies out of an oven? Not to worry. Every good cook burns herself sometimes.

Trying and failing, spilling and splattering buttermilk onto the ceiling, overbaking the muffins, dropping and breaking an egg into the silverware drawer – all of these are signs of a good cook in the making. Who knew?!

Um well, that would be…Grandma.

I’d love for you to share about a homemaking task you feel afraid to tackle. What’s something new that you’re not sure of trying? Have something you’re afraid of tackling?  Don’t worry. Every good cook burns herself sometimes. That’s how we learn! Share with us!