You know how exciting it is when your baby first get a tooth, takes a first step, and says his/her first word? I have to tell you, this past week has ranked right up there as one of the most exciting “firsts” for our family, particular for oldest son, Asa. Allow me to introduce to you the newest member of our family: 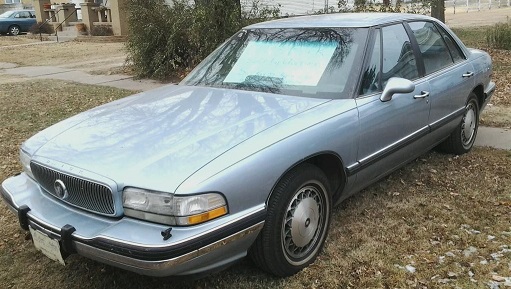 Yes indeed, our 17 year old has purchased his first car.

It’s been quite the event. My dad, Asa’s “Papa,” called a few weeks ago to let us know he may have found a good car if Asa was interested. My dad is an auctioneer, so he frequently comes across items of interest. The car isn’t new, and it isn’t fancy, but if Asa wanted something reliable, this could be perfect. It had been owned by an older person who hadn’t driven it much and had taken good care of it.

We did a lot of research, loving that although the car is old (1994), it has low mileage and a good reputation. Asa decided on a price to bid for the car, and left it in Papa’s hands since the auction was in Kansas. Our family went on to play in a Basketball Triangular all day Saturday while my dad carried on with his auction at the same time. As we were heading home after a long day on the basketball court, the text from my dad came in, “Asa owns a car.”

Shouting and high fives and all around.  He had won the bid! Not only that, he got a lower price for it than we had expected – a blessing for sure!

We are so proud of Asa. He has been working hard and saving his money for years. This purchase was a wise one, and very doable for him because of the way he’s handled his money through the years. He’s even still got a savings cushion (which hurts him on the FAFSA, as we are now learning – don’t even get me started).

He’ll get to bring his car home after our Thanksgiving trip to Kansas, so the timing for this purchase couldn’t be better. As always, God worked this one out just right.

There’s much to be thankful for, and while it’s especially on our minds this time of year, I’m grateful to celebrate God’s goodness each week here during Gratituesday! Your turn to share: What are you thankful for?