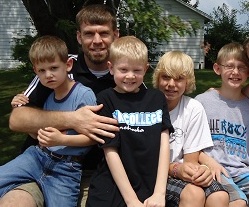 We have a new Christmas shopping tradition at our house. We’ve done it for two years now, so that makes it a tradition, right?

We take a day (and believe me, it does take an entire day) for our kids to Christmas shop for each other, one boy at a time. This means that everyone else stays home playing games with Dad while I take one boy to the store to pick out gifts. The two of us finish, I drop off that boy at home, pick up another, and head back to the store. I do this four times. It’s the best. Not only does each boy get to have one-on-one time with Mom, they get to go to the toy aisle too. It doesn’t get much better than that.

The boys get to spend their own hard earned money on these gifts; what better way to learn about budgeting and spending. Our five year old still doesn’t quite understand that a $119.96 price tag is a bit over $5, so even though his brother would surely love it if he were to purchase the very large and exciting box of Star Wars (trooper, fighter, land speeder, warship, yada yada…) Lego Set, it just costs too much and he’ll have to pick out something else.

The other boys have a little bit better understanding of how to read a price tag. Usually, as we drive to the store, the two of us talk about how much they plan to spend on each gift and what amount would be wise.

This is always such a heart-fluttery time for me, as I love spending rare one-on-one time with each boy. Listening to them plan for how they’re going to spend and what they want to get for their brothers (“because I think he’d really, really like it”) makes me get all melty inside.

And then, my eight year old….oh my eight year old. He was beside himself with excitement during his shopping trip, feeling so grown up with his wallet in his pocket and his list prepared. He was all smiles, but oh so serious about what he had come to the store to do.

As he was picking out a toy for his little brother, I jokingly pointed out a big ticket item and said, “Hey Bud, I think you should get this for him, what do you think?” Looking at the triple figure price tag, his eyes got big and apparently not catching on that I was just kidding, he shook his head and said, “Oh boy. I’d sure like to, but it’s just not in my budget.”

The little cutie. I could have given him a big fat wet kiss right there in front of all the shoppers and Buzz Lightyear for his grown up and wise statement. I resisted and instead snuck in a quick peck on the top of his blond head. He finished his shopping, staying well within his budget and finding fun presents that he was proud to pay for with his own money.

May we all be like the eight year old shopper this year as we make our holiday purchases:  Set a budget. Stick to it.