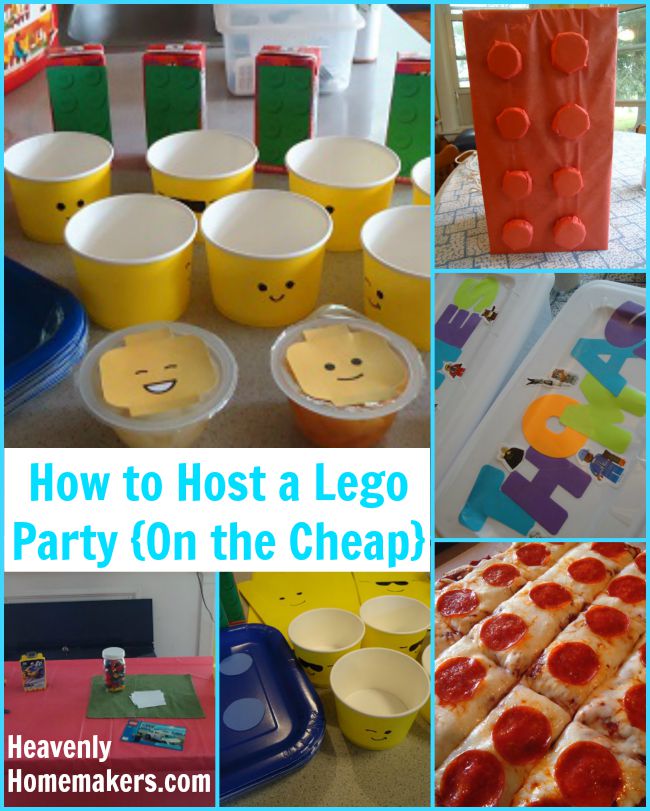 Malachi has been planning and dreaming of a Lego party with his friends for no less than two years now. We didn’t schedule it in though, because I figure, why act in haste? Also, there is the fact that planning and throwing parties is really not my gift and I very much do not enjoy it. As a result, every few hours during the past 730 days, Malachi would throw out a new Lego party idea to which I would respond with a look on my face as if he had just suggested we go lick the spoons of people who were currently running high fevers.

Poor kid. Such great ideas. Such a boring, non-party type mom. 714 days after Malachi’s party planning brainstorming began, I finally got over myself. He and I sat down, looked on Pinterest, found some fun ideas, and got to work. Surely there would be a way to make a Lego party fun, but keep it simple and inexpensive. Yes, indeed. (For the record, there are also many ways to make it complicated, elaborate, and spendy – just in case you feel like the 8 and 9 year old boys in your life will appreciate all the time you spent coloring individual, personalized placemats and notice all the tiny details on a cake which you have carved and decorated into a replica of a life-size Lego spaceship.)

One of Malachi’s biggest desires for his party was that we have a piñata. We agreed to fill the piñata with some of the Legos from his collection that could be played with together once the piñata broke open. Cost? Free. (Okay fine. Already paid for.)  We also agreed that it was a wise idea to put the Lego pieces into a ziplock bag so that they wouldn’t fly all over the yard with the final blow of the piñata.

Did you know that it’s very possible to make a Lego-looking piñata out of one shoe box, 8 bottle lids, and three pieces of tissue paper? Malachi decided I was a genius for thinking of this. I had to agree (with great humility.) 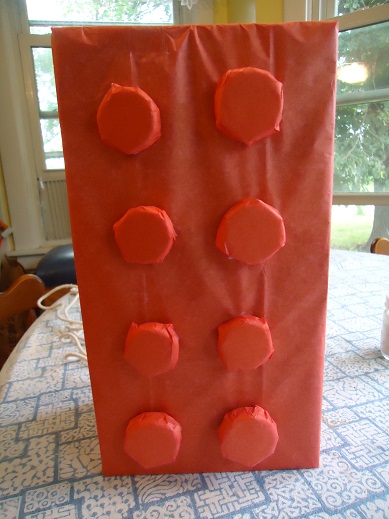 Who doesn’t love putting on a blind fold and swinging at air? Every boy got exactly two turns each, and then… 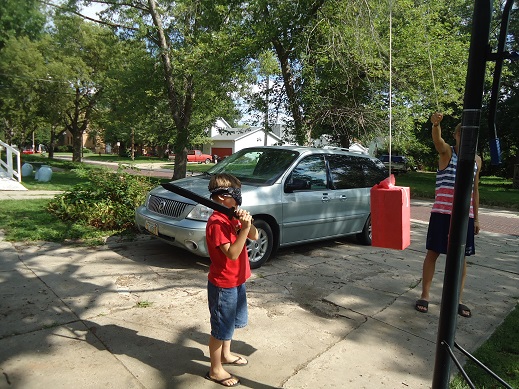 …the rope I had strung through it popped out and the piñata flew into the grass. Did you know that if you blind fold a child, give him a wooden sword, and set him lose in the yard, he will eventually make his way to said piñata and give it a whack? We thought that was perhaps a better plan that having Asa hold the piñata in the air while the kids swung the sword. (You’re welcome, Asa.) 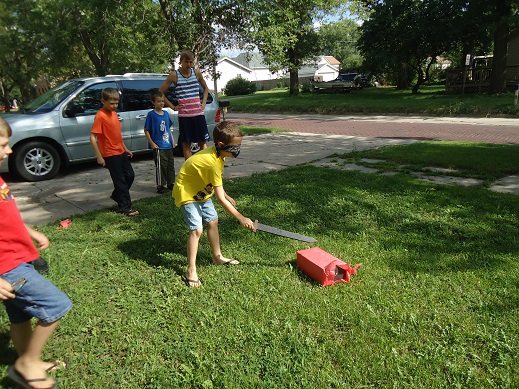 We spent a few dollars on colored sacks, cups, and plates. My artistic ability is very limited, but drawing Lego people faces on cups I managed to pull off well enough. 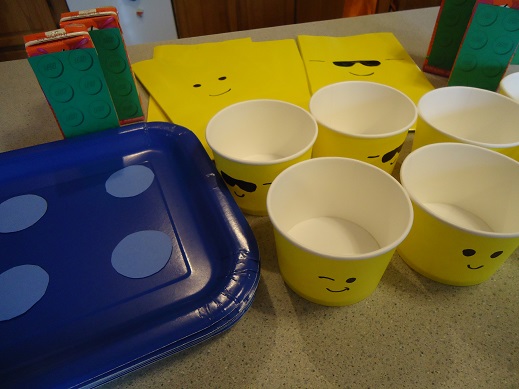 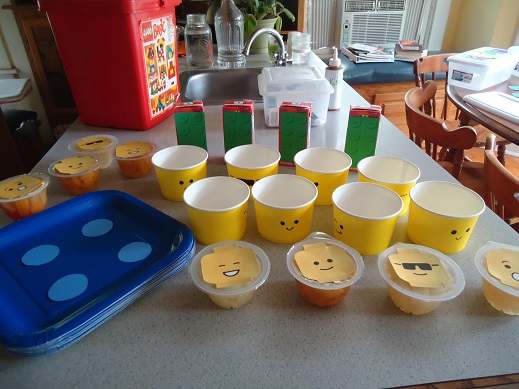 I am well aware that little boys at parties are not super interested in “come on to the table, children, and let’s make a craft!” Still – Malachi and I thought it would be fun for everyone to make a personalized container for their Lego projects at home. 94¢ per container, plus some stickers and contact paper? No problem. 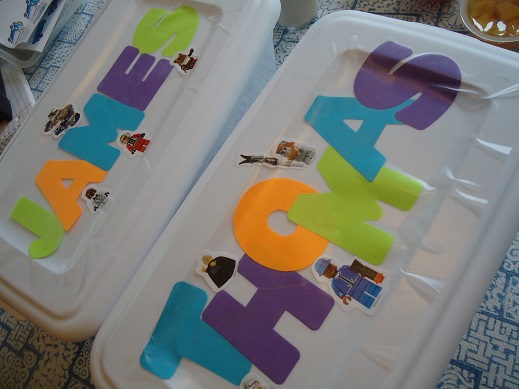 The boys had lots of fun and turned out great Lego storage containers. I’m very sure that now that they have these, they will each and every one do a very good job picking up all of their Legos after working on a project so no one in their households will ever step on a Lego. Again. Ever. 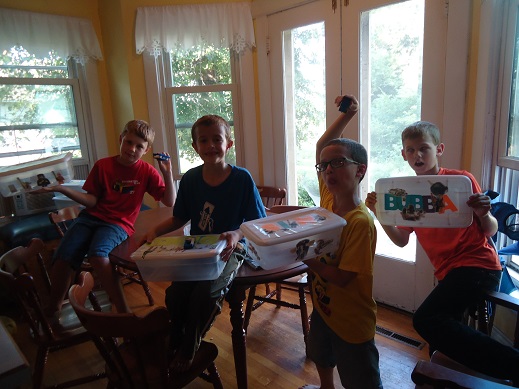 Party food included popcorn served out of a very thoroughly washed Lego bucket, and pieces of pizza that tried very hard to look like 1 by 2 Lego blocks. 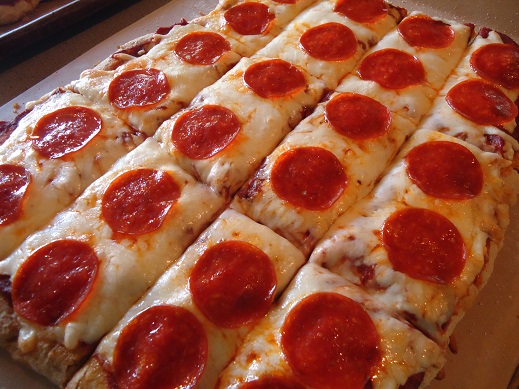 See the jar full of Legos below? Each kid wrote down guesses as to how many Legos he thought filled the jar. The boy who guessed the closest got to take the first swing at the piñata. In case you ever need to know the following recipe conversion:  128 Legos equals 1 quart. 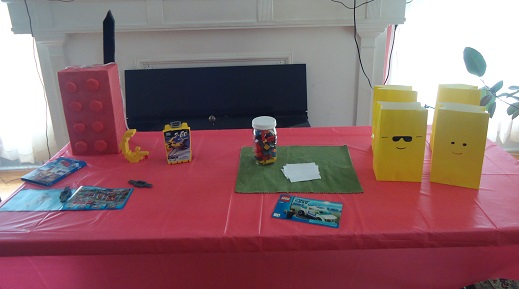 And possibly my favorite free game/activity:  Malachi gathered all of the pieces of two small Lego sets. He divided them evenly into 10 plastic eggs. Our older boys hid the eggs around the yard, then the party goers got to enjoy participating in a L-egg-o Hunt. It was super fun! Once all the L-egg-o’s had been found, the boys worked together to put the sets together.

Malachi was flying high the entire week. Planning, creating, and executing the party was so much fun for him. I’m so thankful we were able to do this together. Maybe I shouldn’t wait so many hundreds of days next time to work with him on a fun project like this? 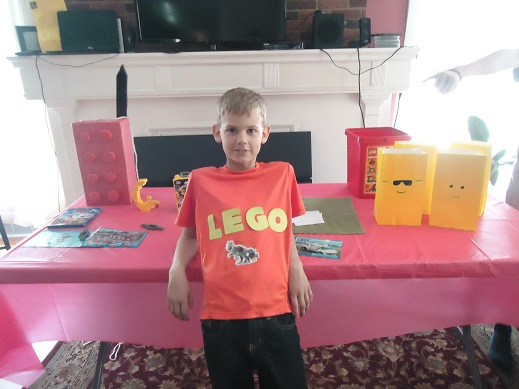 But wouldn’t you know it. Our party guests had been gone precisely 3.75 minutes when Malachi, gleam in his eye, asked, “So when should we have the next Lego party?”