Here are a few random things I thought you might need to know to help get you through the weekend  :) … 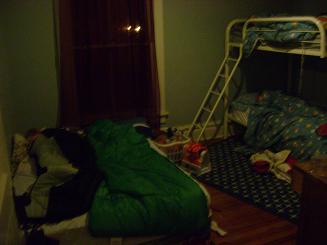 Not that you can tell…but there are two long lumps in sleeping bags
on the matresses, a medium sized lump on the top bunk,
and a little lump on the bottom bunk.
Four boys, one room.

I’m going to go look for Justus’ glasses. I’ll try to post it on Twitter if/when we ever find them!!