I was Surprised by my Love of Paleo Puddings

I’ve been eating a paleo diet since December 20th. Do some math there—it’s been a few days! And for most of that time, there was no pudding. Truthfully, I was blindsided at first: No sugar of any kind, no grains of any kind, no legumes of any kind, and no dairy of any kind. Quickly I discovered a whole new world of food that has brought delight to my family as well. One of our favorites is Salisbury steak with a mushroom gravy and mashed potatoes and asparagus. I’m drooling just typing about it. 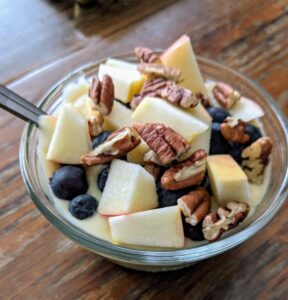 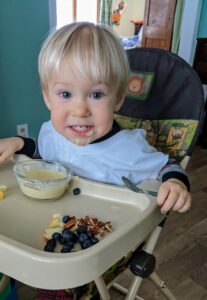 And Then There was Coconut Vanilla and Pumpkin Pudding

Most winters I make Laura’s vanilla and other flavored soothers for my family. Instead of hot chocolate when they come in from the snow, they get a protein packed healthy version.

My paleo version, I believe is even healthier, doesn’t have any dairy, hardly any sweetener, and a solid amount of healthy fat for growing kids and all of us using up so much energy trying to stay warm this winter.

I ordered a case of this from my local grocery store for a small discount. It’s not cheap. But I found I can get it for much cheaper from Azure Standard. (Currently $2.30/can.) Though I haven’t tried the Azure ordered cans yet, it will be coming on the truck in a couple weeks! Canned coconut milk has a higher percentage of liquid and less of the fat/oil. You can use that in this recipe instead of canned coconut cream, just factor in the extra liquid. You may need to add more thickener.

Coconut Milk in a jug

I buy the jug in the cold aisle and go through about one a week. Be sure to buy unsweetened and check labels if there are options at your grocery and get one with the fewest amount of added ingredients. I use this in my coffee, smoothies, baking, and pudding! It is much yummier than almond milk. I’m just going to pretend I didn’t even mention almond milk, because I like to pretend it doesn’t exist. Almond Milk in my opinion is one of the most disgusting . . . blech. So, don’t even. Get yourself some unsweetened coconut milk from the jug.

You can make this recipe with whole eggs, but I’ve had better luck just using the yolks. Egg whites will curdle and get chunky if you heat past 165* and nobody in my family wants to eat curdled pudding. Save the whites in another bowl because you can use them in baking or scramble with a few other eggs. Go ahead and store them in the fridge for a few days.

I ordered a bag of this years ago and use it in place of cornstarch. If you’re not on a restrictive diet, cornstarch will work. Or you can skip this entirely if you want to drink your pudding. A healthy gelatin powder, or collagen works to thicken puddings, but they thicken upon cooling. To recap: if you use gelatin to thicken pudding, it will not thicken on the stovetop!

My preference is maple syrup. For the vanilla pudding recipe, I only used one tablespoon. I think the natural coconut cream is quite sweet. The vanilla extract needs the sweetener, I think. If you wanted to try this with NO syrup, I suggest going very easy on the vanilla extract. The pumpkin recipe calls for two tablespoons to counter the spices and vanilla. Start with less, you can always add more. Feel free to experiment with honey or stevia or other sweeteners of your choice.

Mix those three together in a pot and then turn on the heat. Be careful not to boil.

Scoop out a ¼ cup of pudding and mix a slurry with ¼ cup of arrowroot powder and stir it back in the pot.

Once it begins to thicken, turn off the burner and add in:

Taste and adjust sweetener if necessary.

Either drink warm or chill for pudding.

Frequently I serve this chilled for breakfast with toasted shredded coconut and pecans, blueberries, sliced bananas, apples, or any other toppings to create a full breakfast. We love this for a make-ahead breakfast. My kids can’t get enough.

The same as the vanilla pudding, except add in:

I poured this one in a paleo pie crust and pretended I was eating pumpkin pie for breakfast and had enough for six small servings for the next day. (No, it wasn’t as thick as a traditional pumpkin pie. But it was just as good!) 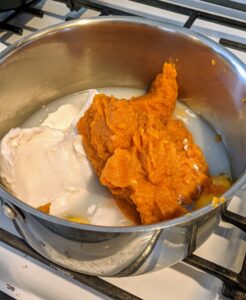 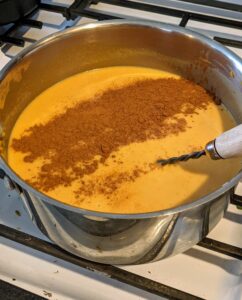 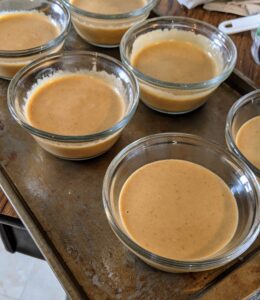 Psssst! All of these great ingredients can be purchased from Azure Standard!

Clearly I’m not saying everyone must eat the way I do, but I have found it to be more freeing than I ever expected. My motivation for staying on this diet is different than most. If you’re curious about that, ask any questions you have! I’d love to chat about it. I’ll just briefly explain, though some people have found great success losing weight with this meal plan, that is not my goal. I’ve suffered headaches for over a decade, and recent lab results show evidence of chronic inflammation and infection among other things. In a nutshell, the paleo diet eliminates all foods that are prone to causing inflammation, as well as cutting out any processed foods that add toxins that prevent my body from healing itself.

God is Greater than Paleo

While I 100% agree that love is better than food and who even cares about free-range chicken anymore? I know I’m on the right path. Laura spent years developing simple recipes and then they were there for her when she needed them! I believe the same has happened to me, for the first time in my life I have the budget to purchase more meat, vegetables, and nuts, to fill in the extra calories I’m no longer receiving from grains and beans and other “cheap” fillers.

Honestly, two years ago I fed my family on $200 a month. Six months ago it was about $450 a month. Paleo food for six (thankfully three of them are still tiny) is costing me $900 a month. If a doctor had told me to eat this way three years ago I would have cried. Point is: Food isn’t everything. Do what you can. Love your people. Love yourself. 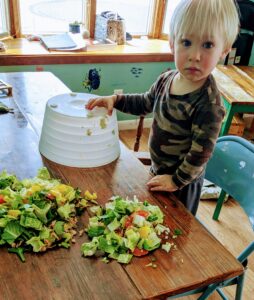 And just in case you think I have my act together, this salad-dumbing disaster, in some form, happens daily. Canned chicken on salad is a go-to lunch for us and that is not the face of a repentant toddler.

What’s your greatest struggle in the kitchen right now? Are you spending more or less time in the kitchen these days? Have you ever been put on an elimination diet of some form?

Try both and tell us your favorite!

Tasha Hackett, friend of Laura and author of Bluebird of the Prairie, a Christian romance releasing Spring 2021, is fueled by sunshine, paleo pudding, or hot chocolate—whichever is more readily available. Though she often pretends to be a ballerina while unloading the dishwasher, her favorite thing is writing with hope and humor to entertain and encourage women. Her time is spent with four chatty children and an incredibly supportive husband. They give her the kind of love people write books about. You can connect with her at www.tashahackett.com or Instagram @hackettacademy or for Laura @heavenlyhomemaker.