Our baby turns eight on Thursday.

I’d be in denial about that if I would allow myself to be. But what good would that do? Therefore, I have found myself practicing saying to people, “He’s almost eight” – just so I could wrap my brain around it and recognize it as truth.

Today, his “old age” dawned on me quite clearly. Yep, Malachi is growing up.

He and I love to play the card game “Blink” together. Since he began playing this game, at about age five, I’ve had to adapt it a little bit. 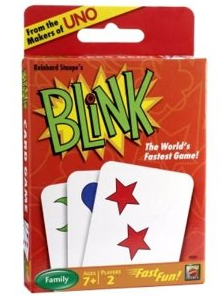 It’s a game of speed – whoever works through their pile of cards first, wins. If I wouldn’t have adapted it, I would have won hands down every single time and the game would have ceased to be fun for either of us. Why? Is it because I’m such an amazing “Blink” player? No, because my adult brain could process faster and my hands could move faster than his.

Therefore, I would always give myself several extra cards (on the sly) so that the game would be more fair. With my stack of cards slightly taller, we could then play an even match – sometimes he would win, sometimes I would win. I didn’t have to slow down or try to “let him win” every once in a while. My taller stack solved the problem and made the games fun for both of us.

It was after he won three games in a row that I suddenly realized that my taller stack of cards was now giving me a disadvantage. He would buzz through his pile, slap down his last card with a big grin and yell, “Done!” And there I would sit, with about seven cards remaining in my pile – pretty much the exact amount of extra cards I have been giving to myself for years.

So from now on, I will be dividing the cards evenly, and hoping that maybe, just maybe, I will still be able to win a few games when we play together.

If not, maybe I should consider make his card pile just a little taller.

I’m kidding. I may be competitive, but I’m not a cheater.

I may, however, try to throw out a distraction every once in a while when I see his pile getting low. “Look! Larry Boy and Bob the Tomato are watching you from the window!”

Okay fine, I won’t do that either.

All this to say, I highly recommend the game of Blink as a great socking stuffer for your “big kids” this Christmas. I’d say kids can generally play this beginning at age five – but even my teenager enjoys it, as do I. Even when I don’t win. ;)

If you want, I can send Malachi over to teach you how to play. But watch out. The kid is fast.