This was a great arrangement for us as we are actually considering getting ourselves some chickens next spring. We thought this would be great practice for our boys. We were right – it was great for them. We fed, watered, set them “free” each morning, closed them up to roost each night and the most fun part of all – we gathered eggs.

Our younger boys were even delighted to get up early to go do the morning chicken chores. I think they felt manly and “farmish”. In fact, Malachi, our six year old, insisted on putting on his full cowboy gear before we headed over to care for the chickens twice each day. Even early in the morning, he stumbled into his bandanna and boots.

I also decided not to tell him that I wouldn’t need a cowboy hat. 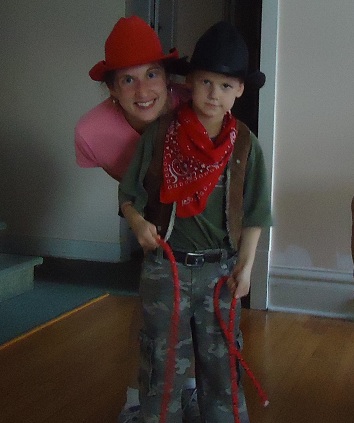 Thankfully, the chickens were not unruly and we did not have to lasso a one of them.

But it never hurts to be prepared.