I have had the most fun day today. We bid farewell to the last of our graduation guests yesterday (sniff), then I spent the entire day today playing with cinnamon sticks. 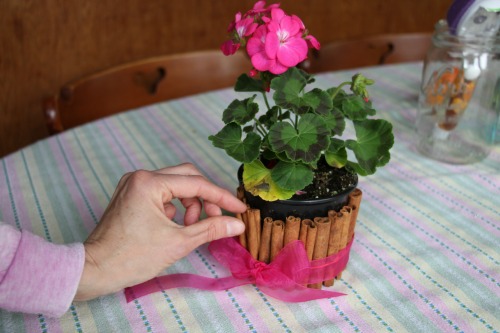 Say what??! Trust me. I’m pretty sure you’ll want to spend a couple of hours playing with cinnamon sticks too after you read this. 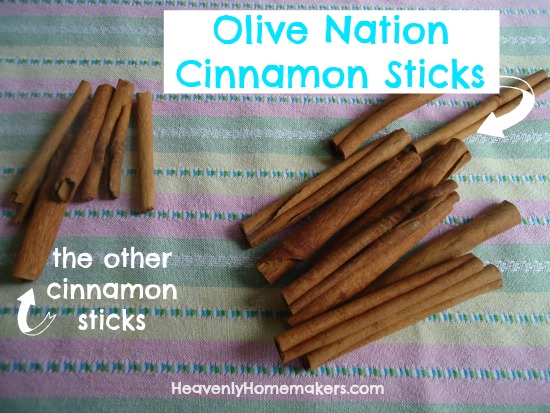 My Cinnamon Sticks came from Olive Nation. I could tell a big difference in the quality of their cinnamon sticks – so big a difference that I took a picture of them side by side. Olive Nation’s sticks are bigger, more fragrant, and just overall much, much nicer than others I’ve purchased from other sources. This doesn’t surprise me. Olive Nation products always rise above the rest. (Yet their prices are still reasonable. I love this. Plus they give us all a 15% discount when we use the code: home.)

THIS is the part where I become giddy. I have found so many awesome uses for these this summer! Not to mention I’ve discovered that cinnamon sticks are wonderful for our health. Cinnamon can help lower cholesterol levels, aid in pain relief,  help with digestion, help us avoid bladder infections, and help regulate blood sugar levels. And that’s just the beginning.

10 great ways we should all use Cinnamon Sticks this summer.

Special thanks to my son Asa who used his talent with his brand new camera to help me get some wonderful shots of our cinnamon projects today. 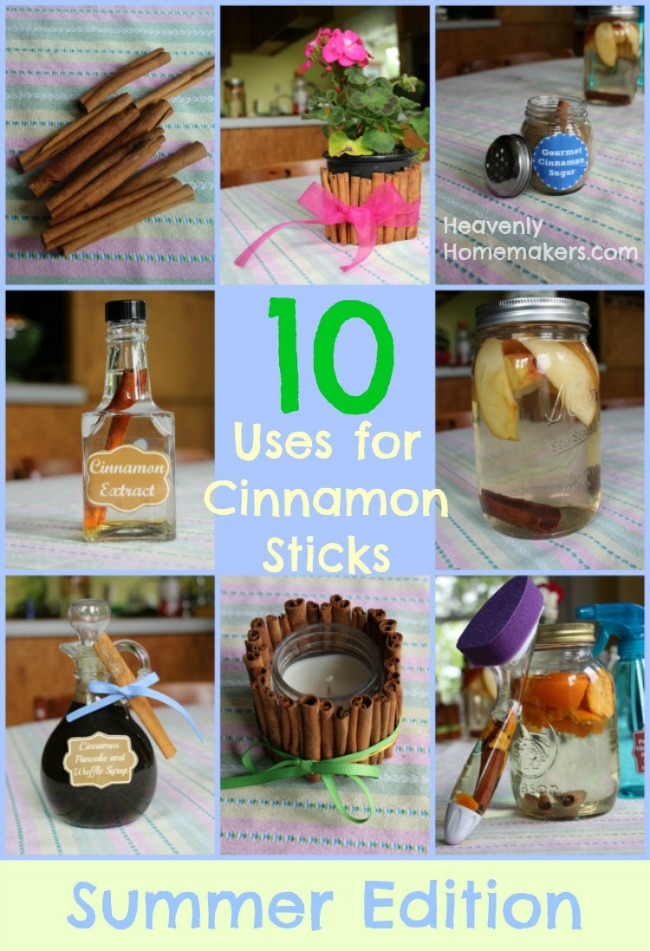 10 Ways to Use Cinnamon Sticks in the Summertime

1. Use Cinnamon Sticks as a Natural Insect Repellent.

Want to avoid mosquitoes? Put a small citronella candle inside a jar. Tie or clue cinnamon sticks around the outside of the jar. Light the candle outside while you’re sitting around visiting and enjoying the summer weather. Insects are turned off by the smell of the cinnamon and citronella, and you can enjoy the scent plus the freedom from bugs! 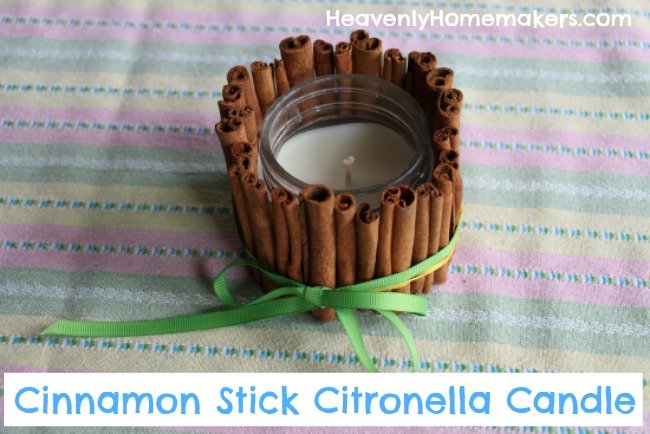 Bugs already got to ya? Mix up a little bit of honey and ground cinnamon. It will alleviate pain and itching. At the same time, this honey/cinnamon combination will disinfect the area while moisturizing and healing. Amazing.

This is not only a great way to repel bugs inside and outside – it is super adorable! Hot glue 25-30 cinnamon sticks around a flower pot. Tie a ribbon around the cinnamon sticks to complete the project. I can’t stop staring at my flower pot in all its cuteness! 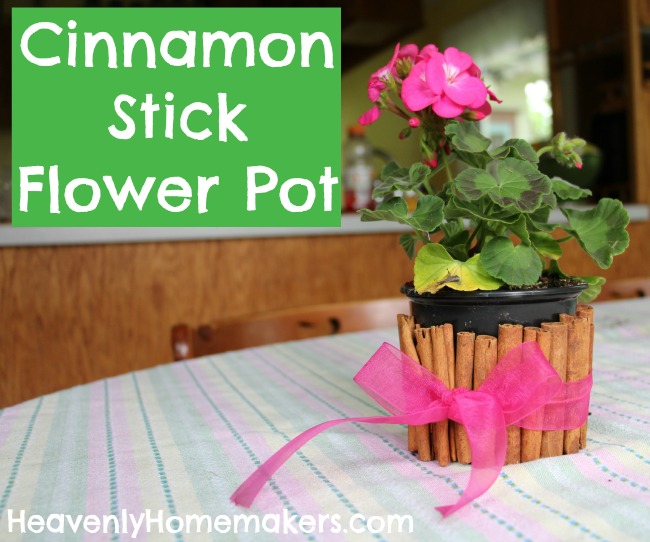 Or use fresh or frozen pineapple with cinnamon sticks instead. Either way, you’ll have a cool, refreshing drink that is good for your system. Simply slice one apple (any variety) into a quart jar. Add 1-3 cinnamon sticks. Fill jar with water. Allow mixture to sit for a few hours to infuse. Chill and serve. 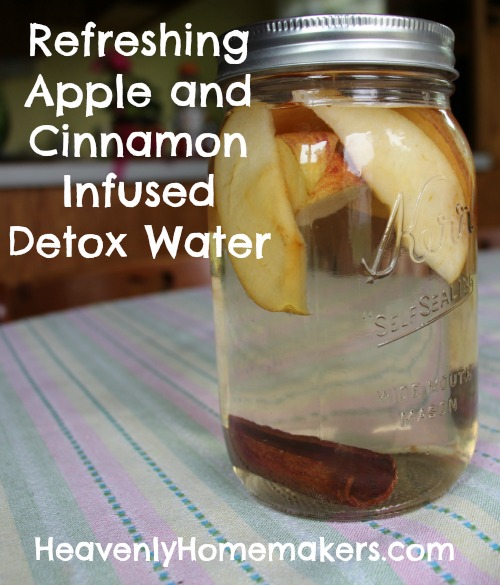 5. Start a batch of Cinnamon Extract for Christmas gifts.

I am so excited about this one!! After all my years of making Vanilla Extract, I’m venturing out to make other extracts – beginning with Cinnamon Extract. (Watch for other fun extract recipes soon!)

How to Make Cinnamon Extract: Place three cinnamon sticks in one cup of brandy, rum, or vodka. Store in a dark place (such as a kitchen cabinet). Shake the jar about once each day for two weeks. Voila. Merry Cinnamon Extract Christmas to the family this year. (Don’t tell them how easy and inexpensive this is.) 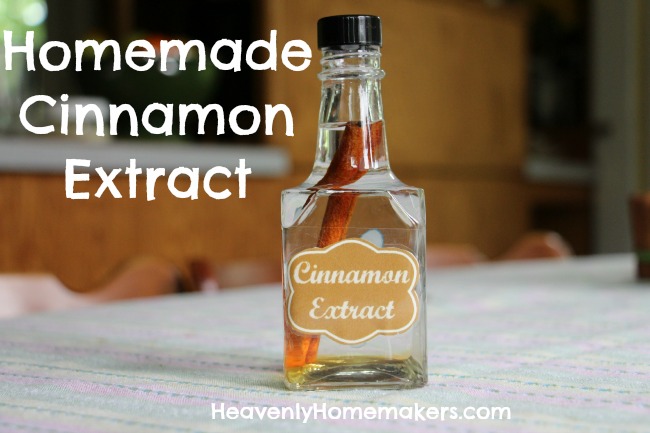 Fill a quart jar about 3/4 full of distilled white vinegar. Add 3-4 cinnamon sticks and 1-2 oranges worth of orange peel. Secure lid. Store in a dark place (such as a kitchen cabinet) for two weeks, then strain out cinnamon sticks and orange peel to transfer liquid to a spray bottle. This is so simple and inexpensive!

And here’s another great cleaning option: Put a Cinnamon Stick into a cleaning bottle with attached sponge (like the purple one pictured below) for a fresh, cleaning fragrance. 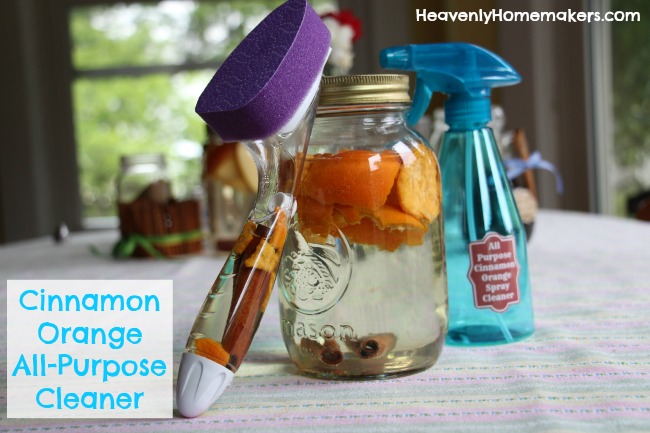 7. Grate a piece of cinnamon stick into yogurt or add it to a smoothie for a refreshing summer meal or snack.

What a great way to add deliciousness to a cool treat! You can also grate cinnamon into your coffee or tea.

Yes, yes, yes. Make this. Bottle it up for gifts or enjoy it at your own breakfast table. It is super easy to make and crazy delicious.

Place all ingredients in a small saucepan. Bring to a boil, then remove from heat. Cover and allow mixture to steep for 15 minutes. Remove cinnamon sticks. Store Cinnamon Pancake and Waffle Syrup in a jar in the refrigerator for up to two weeks. 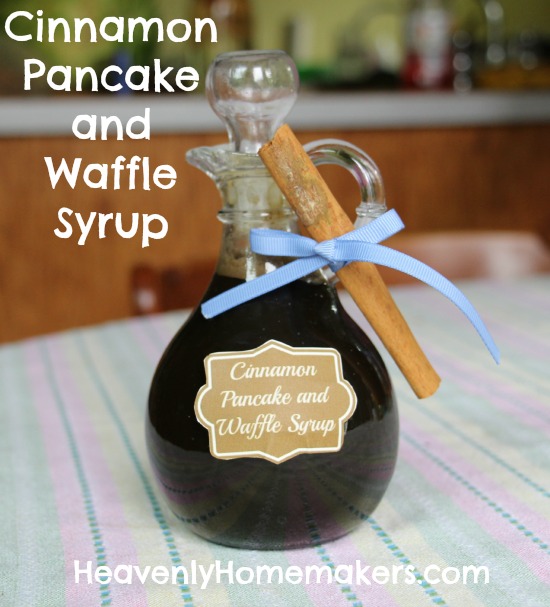 It does not get any easier than this. I’ll be including a jar of this sugar with my Christmas gifts of Cinnamon Extract. I should also include a loaf of bread and a stick of butter – then my recipients would be set. 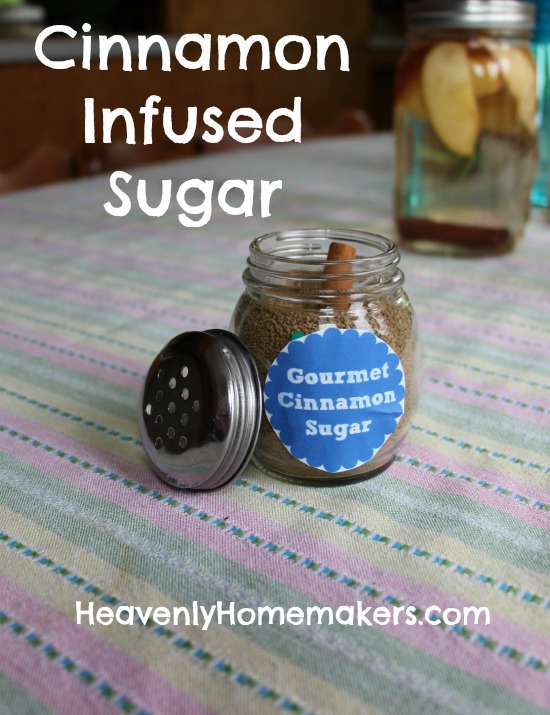 Feeling tired, lethargic, or low on energy? Pull out a cinnamon stick and give it a whiff. It’ll help you find your focus. Who knew? Easiest energy boost ever. From now on, I’ll be keeping cinnamon sticks at my desk. Hmmm…just took a whiff of one right now. Perfect.

You Can Reuse Cinnamon Sticks

Save $$. Get more than one use out of your cinnamon sticks!

To reuse your cinnamon stick, simply rinse it under hot water then allow it to dry. Run the stick over a grater a few times to release the flavor. Do this up to 5 times before discarding. Way to get a lot of bang for your buck!

For high quality, reasonably priced cinnamon sticks, I recommend Olive Nation. They are great to work with us here at Heavenly Homemakers. Here’s what they offer:

A Freebie To Go With These Cinnamon Stick Ideas!

Download a page of free printable labels to go with the gifts you might choose to make: Cinnamon Extract, Cinnamon Sugar, Cinnamon Orange All Purpose Cleaner, and Cinnamon Pancake and Waffle Syrup. Attach them to your jars and bottles, tie with a ribbon, and you’ve got an adorable, inexpensive, and useful gift! 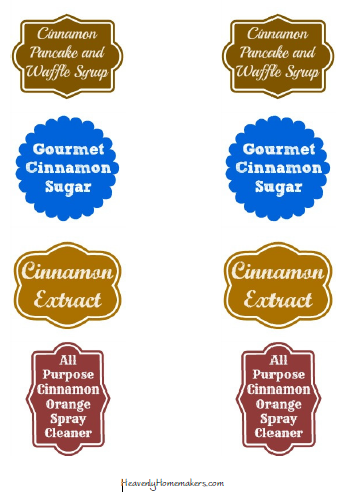 Leave a comment to tell us what you’re going to make first!