Today is the biggest day of our challenge when it comes to time and effort. We’ll be making Chicken Broth, plus shredded cooked chicken for salads and stir fries. We’re doing it first, just to get it out of the way. The rest of the week will be so easy you won’t know what to do with yourself.

The best thing about today is that while it does take several hours to make broth, it doesn’t actually take hours of work on your part. Once you get your chicken and veggies cooking, you can just walk away and let it do its thing. By the end of today, you will have several jars of rich, nourishing broth. Plus you’ll have cup after cup of cooked chicken. Having cooked chicken means you have all kinds of quick meal options. Simply toss your cooked chicken into soup, casserole, salad, or stir fry.

Begin making your Chicken Broth by putting your whole chickens, carrots, onions, and other veggies into a large stock pot. Fill 3/4 full of water. 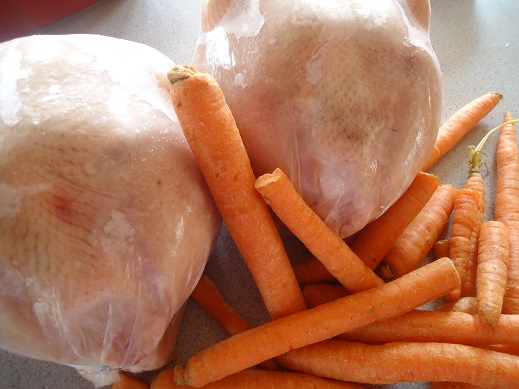 Cover pot and bring to a boil. Reduce heat to simmer, leaving lid on. Allow the chicken/veggies/water to cook for 3-4 hours. See a thorough Chicken Broth Tutorial here. 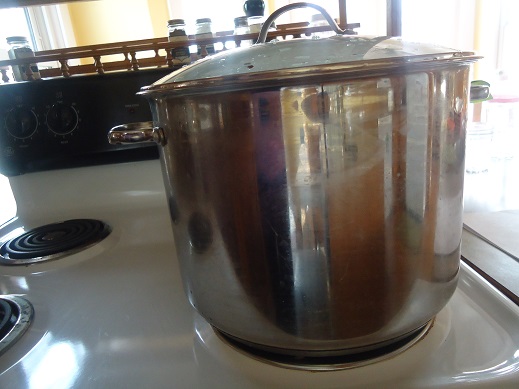 Remove chickens from pot, placing them on a platter to cool for a few minutes before you take the meat off the bones. In the meantime, strain out the veggies and broth. Throw the mushy veggies into a blender, give them a whiz until they are smooth, then stir them into your broth for extra nourishment! Pour broth into other bowls or pans so that it can cool.

Time to debone those chickens. 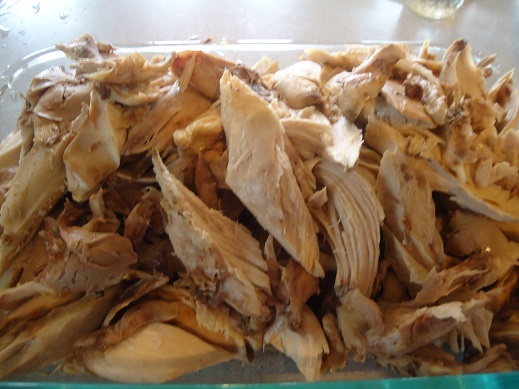 Confession time:  I thoroughly dislike de-boning chickens.  I don’t know why, I just don’t like it. So what does a good mother do? She calls in her children and makes them do the job she doesn’t enjoy. The good news:  My four boys got right with it and had the meat off those bones in no time as if it wasn’t a job to be despised. Justus (age 14) and Malachi (age 9) left the kitchen afterward while saying the words, “Well, that was fun.”

I’m pretty sure they liked it because he could nibble chicken while they worked. Okay by me. I didn’t have to debone the chickens.

Important:  Once the chicken is off the bones, I always throw the bones back into the pot, fill it up 1/2 full of water, and cook it for another few hours to make even more broth. Gotta use those great chicken bones for all they’re worth! While round two of broth was cooking, I got to work with that cooked chicken.

I packaged up three Ziploc freezer bags with cooked chicken to pull out for soups and casseroles. Then I made a big batch of Chicken Salad. I put it into the fridge and had two meals worth ready for quick lunches. Love this! I put the remaining chicken in a glass pyrex storage dish in the fridge to have chicken chef salads this week. The bagged chicken went into the freezer. 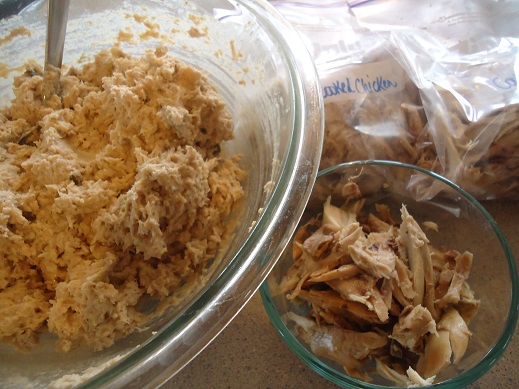 When it was all said and done, I ended up with 5-half gallon jars of chicken broth. Some is in my freezer, some is in the fridge for soups this week. 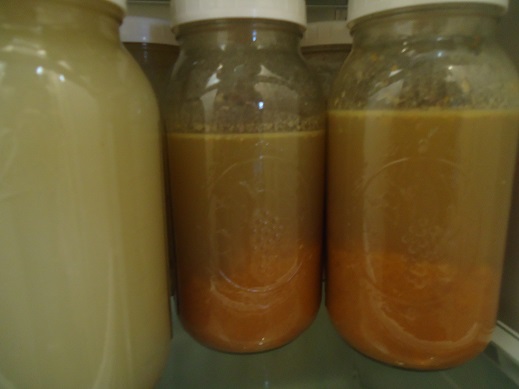 You can tell the difference between batch one and batch two. Batch one was cooked with veggies. Batch two was cooked with bones only. I certainly could have thrown in more veggies for round two, but I was plumb out of carrots and onions at that point. I’ll be sure to use the veggie-less broth to make soup in which I add veggies in.

Take note also that if you are going to freeze broth in jars, be sure to leave 2-3 inches of space at the top of the jar to allow for expansion. Do not put them into the freezer until they have completely cooled.

After today, give yourself a huge pat on the back for a job well done! This day is a little more labor intensive than others will be, but think of all the wonderful meal possibilities you’re creating with just 2 chickens!

Coming up next in the freezer cooking challenge, we’ll be making Black Bean Chicken Nachos….