I’m sure you’re all wondering: Did Tasha pay off her huge debt in just one year?! Read Part 1 of this compelling sage here! 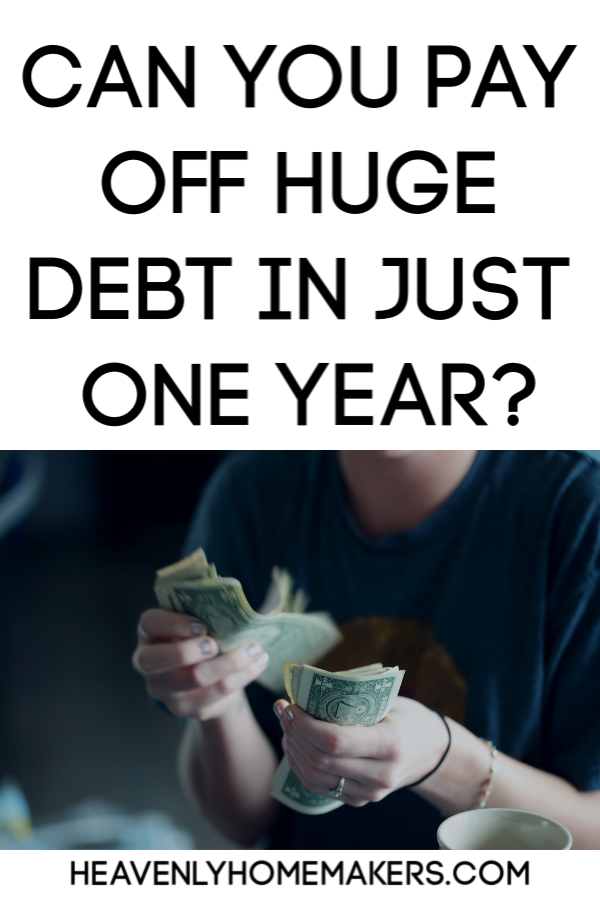 Did Tasha Pay Off Her Huge Debt in One Year?

I had decided that I was not going to be in debt forever and better yet, was going to scramble out of it as quickly as I possibly could.

Could we live on half our income? Our one-salary-teacher’s-pay income?

Could we bust out a large portion of our debt in one year? It seemed drastic. But also super exciting because, as mentioned, I am highly motivated by challenges and numbers and worksheets and goals and if we pretended it was all just one big game maybe it wouldn’t be so bad.

At the time, our take-home pay was $3,300 a month (Just under $40K a year). That meant we needed to live on $20,000. I knew it could be done because we had been living on that seven years ago… except we’d only had one kid and a smaller house and only one car and one phone and no internet and we never went out or did anything that cost money and ate potatoes and cabbage and beans and eggs and grape juice was a fancy treat. *Whew*

But I saw in my pencil-in-the-margin scribbles: So you’re saying there’s a chance.

What about the rest of my family?

I have the gift of persuasion. Ask my three siblings. And I know what motivates Ben. (Dreams of vacations to Disney World, sport cars, steak…) He began listening to Dave Ramsey Podcasts in the shower and on the way to work, so he was definitely on board with my crazy plan. We named 2017 “Year of Plenty” to remind us that we really did have plenty and that we were making this choice. On purpose.

I’ll skip to the end: It didn’t work.

We couldn’t do it.

In July I fell to my knees and prayed earnestly for God to pay these debts off. I began praying multiple times a day for this specific request. That’s when I realized my debt-pay-off goal was incredibly self-centered.

God did a number on my attitude about money that year. When I realigned my will with God’s and continued to petition his aid, He delivered. As he does over and over. I am no longer surprised by this, just expectant of his wonderful plans, though it took me 32 years to get there.

Whaa!?!? I know. That’s nine thousand more than planned. I can’t even. God does amazing things. I’ll go into detail later on what living on half our income really looked like. For now just rest assured that what is impossible with man is possible with God. I’m not preaching a health and wealth gospel to you.

I’m telling you that I was sick of being where we were and so I asked and let God change our hearts.

I was sick of “being poor” and realized, with a heavenly tap on the shoulder, that I wasn’t poor. I had plenty. More than plenty. I just needed a fire under me to get started. I needed a reason to do this hard thing. I needed to see a light at the end and begin to hope and plan and dream of a different kind of financial life. When a family requests money to fund their mission work in Ecuador I can say, “Absolutely!” and write off a thousand dollar check and not worry about feeding my family. We had one year of plenty which opened our eyes to enjoy a year of generosity, and early 2019, except for our home mortgage, we finished off all debt, including Ben’s MA degree and baby number four medical bills… and…. What are we going to do next? (besides buy that Blentec??)

All six of us, on a plane, to stay in a hotel, to enjoy the beach and frivolous theme park extravaganza. And we’re paying cash for all of it. The freedom we’re experiencing from 2 ½  years of “extreme” consumer sacrifices is TOTALLY WORTH IT.

My seven year old recently asked me, “Mom, are we rich?” I answered without a pause. “Yes! We are rich.” My four year old chimed in, “What is rich?” I answered, “Rich is having enough money to buy all the things you need.”

Someday they’ll grow up and think maybe I lied to them. But I pray they always feel rich, that they can distinguish between need and want, that they learn at an early age how to tell their money what to do, that they will live generously with whatever God will provide.

We have new and challenging and exciting financial goals for 2020 because we now understand, because we have plenty and are so rich, that if we don’t have a set plan for our money it will walk away all by itself.

I can’t wait to share with you all the things I’ve learned and am still learning on this journey.

P.S. I know you’re saying, “Wait! This was a why story, what about the how?” I know! This too shall come. In the meantime, drop a note below. Do you have a goal for your money this year? What motivates you to pay off your debt? Are you having trouble finding a motivator? Are you debt-free? How does it feel!?