I’m gonna just admit to you that I bit off more than I could chew this week (so pardon me while I type with my mouth full).

This was not a good week for me to try to make extra food. This would have been a good week for me to HAVE extra food in my freezer ready to pull out and warm up quickly. But what did I do? I cooked extra food. In the midst of running around like a funky chicken taking my kids to soccer and musical practices…putting the final touches on all of our LTC projects…preparing for a short trip…working on costumes…going on a field trip…sorting through spring/summer clothing…and doing school work.

WHAT was I thinking?

I am NOT whining. No ma’am. I’m just saying that maybe next time I should make a better judgment call on when I should do extra cooking.

And also, I’m letting you know that every single room of my house looks like a bomb went off. There were apparently separate bombs for every room and some bombs were larger than others and had a flying clothing effect.

Ah, but at least I have lots of prepared food in my freezer now, eh?

Here’s a run down of the week:

Sunday night I started a pan of beans to soak and mixed up a double batch of tortillas to soak overnight.

Monday morning before schooltime, I started cooking beans and rolling out tortillas. I put together the Bean and Cheese Burritos and got them into the freezer by noon. I then mixed up a double batch of dough for Homemade Pizza Pockets and Beefy Enchilada Bake to soak. I also made a batch of Homemade Ice Cream for the Ice Cream Experiment. That was it for Monday. 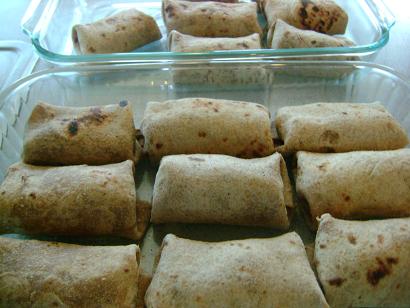 Tuesday was the biggest cooking day as the only extra thing we had going on was one soccer practice.

I got five pounds of meat cooking before breakfast. Once I got the kids started on their math and other individual work, I mixed up a double batch of Corn Dog Muffins and got those into the oven.

The meat was then finished browning, so I stirred up three pounds of Sloppy Joes and put them into jars for the freezer. The remaining two pounds of hamburger helped make up two big pans of Beefy Enchilada Bake.

I then set about putting together Homemade Pizza Pockets and Mini Apple Pies. I had to take a break somewhere in there and feed us all lunch. Everyone was disappointed that we weren’t having pizza pockets and apple pie for lunch. (Ah, but what they didn’t know what that I had secretly stuck a big apple pie in the oven for later!) 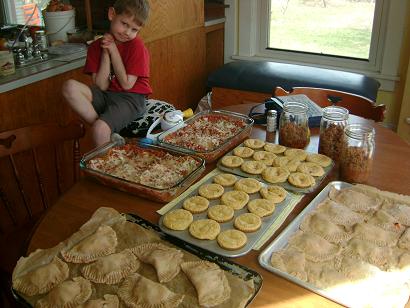 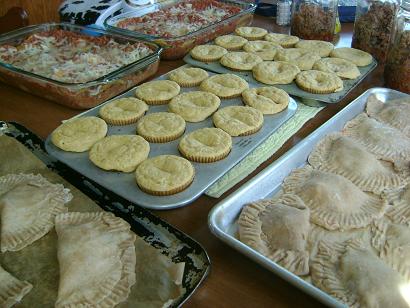 And here’s a closer-up picture of the food…but without the five year old..
so this picture may not be as fun to look at. 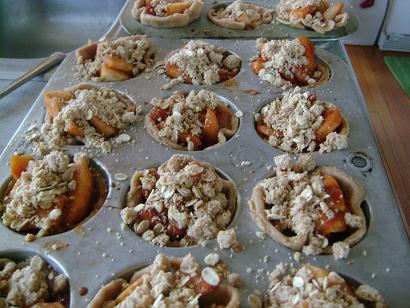 Finally, I got the Mini Apple Pies finished and put into the freezer.
Those will make a wonderful breakfast some morning soon!

I finished Tuesday off by mixing up a double batch of Giant Breakfast Cookies to soak for the next day.

Wednesday I spent the morning baking Giant Breakfast Cookies. While each round of cookies was in the oven baking, I’d go tackle some homework help or spring clothes sorting.

I took some time to shake up some Ranch  Dressing Mix, Italian Dressing Mixand Taco Seasoning Mix. I LOVE having these mixes ready for when I need to make dressing or dip or tacos or…all the other things I use making these mixes. 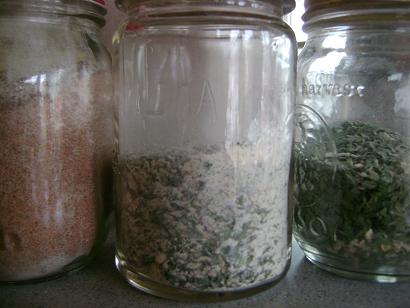 And there you go. I didn’t quite finish everything on my list, but that’s okay! I think we will be using many of these convenience foods next week while we CLEAN UP the war zone that is our house.

Has anyone seen my broom?