Have hot pepper in your eye? Grab milk (preferably whole milk) and splash it into your eye. Aaahhh blessed relief. Then come back and read my story. 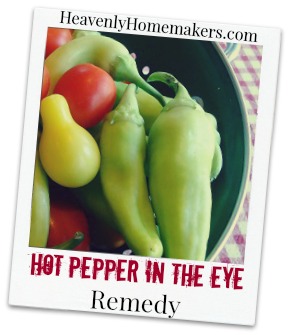 First I would just like to say that the number one remedy for bringing relief to the pain of hot pepper in your eye is simply to wear gloves while cutting peppers and NEVER EVER TOUCH YOUR EYE after cutting them.

However, since I was not quite so smart last Friday, I had to come up with another remedy.

It all started so innocently. We needed to leave for our homeschool PE class that morning, but I was trying to get some of the peppers from our garden cut up and frozen before we left. Matt has been the pepper guy at our house most of this summer so I was not aware that some of them were of the very freakishly hot variety. (They were shaped like tiny sweet bell peppers.)

I got all the peppers cut up and put away, cleaned up my mess and washed my hands. I then proceeded to help get the boys ready to head out the door for PE. My eye was itchy…and so I scratched it.

As if someone had lit a match on my eyeball I shrieked and turned in a circle (because I didn’t know where to go or what to do). I believe that little move is called the Eyeball Fire Ballet Step. I then ran out of the kitchen and upstairs to Matt, who was thankfully home that morning. Neither of us really knew what to do, but I quickly put a cold, wet washrag on my eye. This brought a small amount of relief, which is good because all four boys (who aren’t used to seeing their mom run screaming out of the kitchen) had made their way upstairs to see if I was still alive. At least I was able to look up at them with one eye and a half smile to give them a little assurance that I was okay.

Matt went ahead and loaded up the boys to take them to PE. I decided to stay home and be miserable. The pain was not going away, and was in fact creeping all the way up to my forehead and all the way down to my chin (not kidding), making me feel as though I might pass out. I have a pretty high pain threshold, but wow.

With the cold wash rag over my burning eye, I somehow did a swag search on “hot pepper in the eye” to see what I needed to do. Did I need to go to the ER? Could they maybe take off my face so that the intense pain would stop?

I finally found a suggestion to use a shot glass full of whole milk to wash the eye, which would neutralize the capsaicin in the peppers that was causing the burning. Whole milk I had, a shot glass…not so much. In the meantime, one of the homeschool moms (who had heard of my woes at PE class) called to say the exact same thing (although she didn’t mention the shot glass).

Using one of our little drinking glasses, I was somehow able to get milk into my eye. (Don’t ask me to demonstrate.)  I also did a fairly good job of making the milk run all the way down my face and neck, but whatever.

Instant relief.  I stood there, blinking milkily in unbelief. Could I really have just gone from that much pain to practically no pain with just a few swishes of milk? Indeed I had.

I then decided that I should make cookies, both because I deserved and needed a cookie after my trauma…and because I thought that when the boys got home, they might like to see that their mama was normal (relatively speaking) and okay.

Kinda brings a new dimension to the idea of milk and cookies bringing comfort, doesn’t it?

(P.S. It wasn’t until after the flame in my eye was extinquished that I realized that my hands were also burning like mad. Funny how the eye pain overshadowed the pain in my hands. I’m still a little afraid to put my contacts in normally. Good grief did I learn my lesson.)