Two days before we were to leave for Colorado, we still did not have plans worked out for Day 2 (Friday). Eek! It’s not like we hadn’t tried. In fact, we had emailed several ministries that we knew of in the Denver area. Answers kept coming back like, “Sorry, we don’t have anything available for you to do that day” or “We have a minimum volunteer age of 10” or “We are closed only one day each year – and the day you are coming just happens to be the day.”

Seriously. Doors closed one after another. We weren’t worried though. We figured those doors had closed because God had something else in mind for our family that we just hadn’t figured out yet. We continued to pray for direction.

We finally heard of a ministry run by a church in downtown Denver. They offer free groceries for low income and homeless families, available for pick-up on guess which day? Friday, of course. Could they use our help? Yes, they sure could. Perfect.

We showed up just after 8:00 in the morning. Food was being unloaded and sorted. We introduced ourselves and were put right to work. Malachi was put in charge of setting out shoes. (They offer free clothing too, not just groceries!) 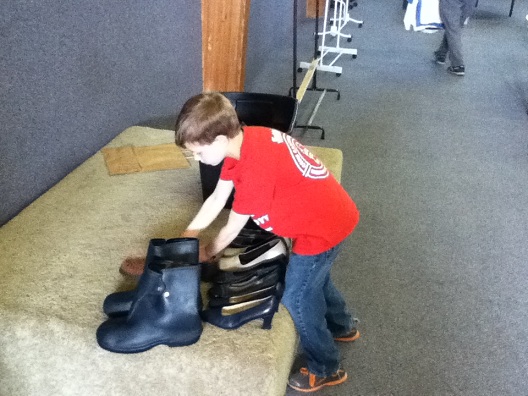 Mountains and mountains of lettuce, potatoes, breads, eggs, canned goods, granola bars, and so much more were brought out and organized on tables. We put our boys’ muscles to work. I can’t believe how much they enjoyed the jobs they were given to do. We all did! I think it may have had to something to do with the fact that we were dealing with food and obviously – we love food. Even when we aren’t the ones eating it.  It felt great to be working hard at a task that would bless so many families. This church group is really meeting a need in their area each week. We were so blessed to be a part of it. 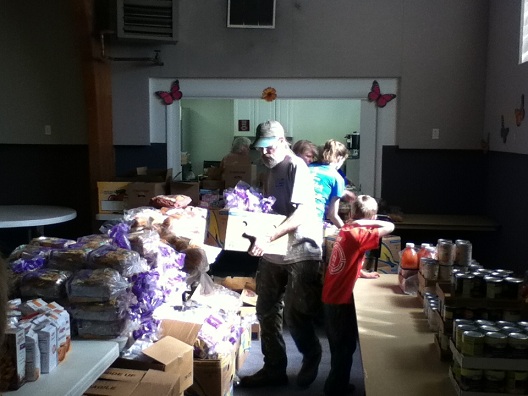 Right before doors were opened to hand out the groceries, we were all put in charge of “stations.” We were to replenish the supplies of food at our table, letting each person know, “You can pick one of these, fifteen of these, three of these…” 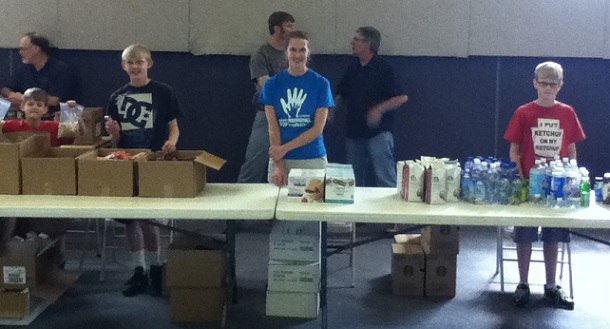 Asa was thrilled because he got to have his first “real” conversation in Spanish. He and Justus have been studying it for two years. A man from Honduras came through the food line, and Asa struck up a conversation with him. I’m not sure who enjoyed it more –  Asa or our new spanish speaking friend. (Of course, then the man assumed that the mother of the spanish speaking child also knew spanish. I hated to disappoint him!)

After several hours, doors were closed, leftover food was put away, and we were able to help clean up for the day. All throughout the day, the boys kept saying to me, “This is so much fun” and “I really like doing this.” Ah yes, just like we had told them as we prepared:  Serving others is such a joy when you do it with a Christ-like attitude.

We left that day tired, yet completely energized by the people we worked with and for. Our prayer is that those we were with felt equally blessed.

Stay tuned for more details of our trip!