I figured you’d surely like to hear about that one time I had to chase my taco. Yes? Ok. 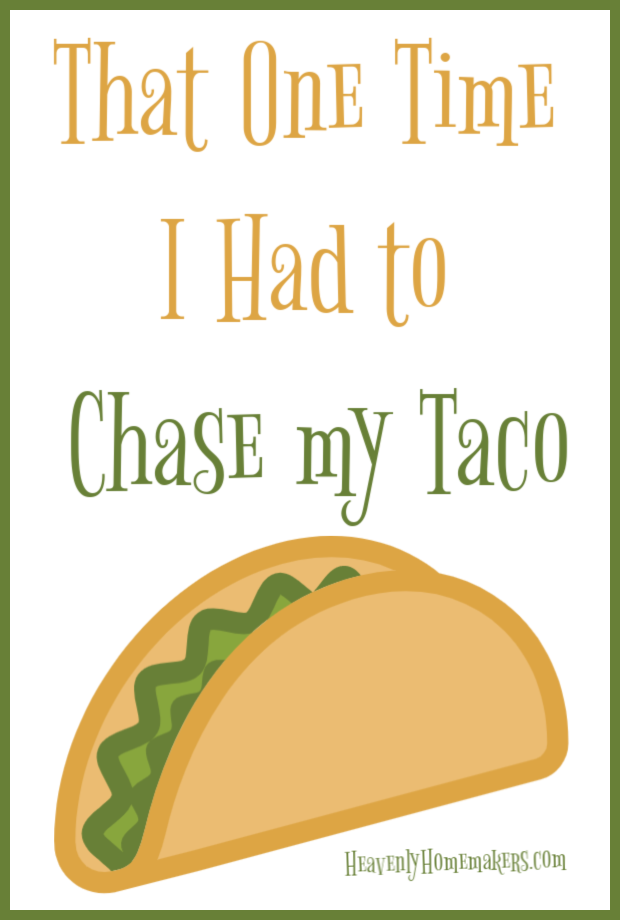 That One Time I Had to Chase My Taco

T’was the month of December, and every time I went to Walmart I inevitably filled my cart to the max. Sure, I was Christmas shopping, but also, there were nine of us living in our house at the time and the groceries required to feed nine people plus a frequent surge of college friends always results in a very full cart at Walmart.

(Asa has since moved away to enjoy his wonderful new job; Justus moved back to the dorm; so now there are “only” seven of us. Not to worry, my grocery cart still overflows.)

So there I was, alone at Walmart with a cart filled to the top. Mmmm, we shall pause a moment to reflect on the fact that I WAS ALONE. This is a miracle in and of itself because of the aforementioned nine people in our household. Ahh, Mama was shopping alone. 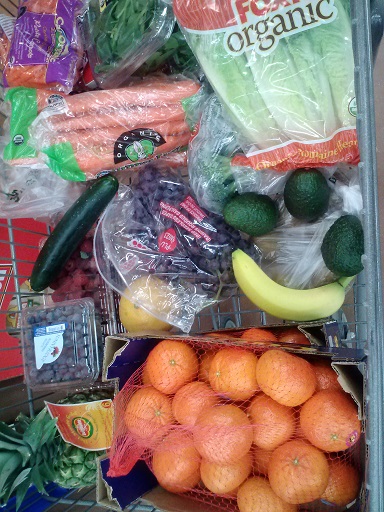 With my list almost fulfilled and then some, I decided that since I was alone I should consider what I needed for Brayden’s upcoming birthday party. We’d be feeding quite a crowd – tacos, one of Brayden’s favorite meals. And we needed some games and activities to keep the kids busy…aha. A pinata. That would be fun!

I muscled my very full cart to the back of the store to search for pre-made pinatas. While en route, I had a conversation with my frugal-minded self: Couldn’t I just make a pinata myself for very little money? Great idea! But no. Seeing as there were nine in our home and two of them are babies and one of them was a busy 5 almost 6 year old – pinata-making would not fit into my day. Just fork it out, Laura. Just buy the pinata.

I found many pinatas hanging in the party section. Ooh, a Minion pinata. Brayden would love it! Ouch – I took a look at the price tag. $19. Ugh. Keep looking, keep looking…aha! A taco! It was a pinata in the shape of a taco, and who wouldn’t want to take a swing at a taco after eating a taco? I shook my head at myself for finding this to be so clever. The price was lower, but still a cool $14 for a flimsy chunk of cardboard with tissue paper stuck to it.

Still, it was a pinata and it was completed and I would not have to make it. Plus it was a TACO {chuckles quietly to herself as she ignores the price tag and puts the golden taco on the bottom of the cart}. 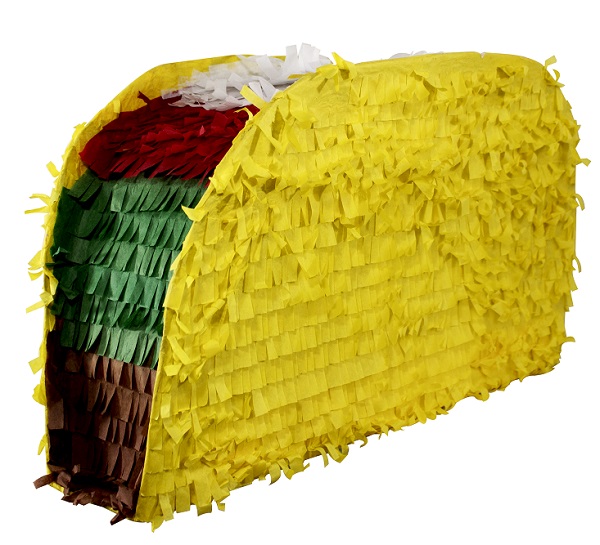 Somehow I made it through the checkout with my incredible load of loot. God bless the cashiers who draw the short straw resulting in their turn at scanning and bagging my trillions of items.

My cart was heaping full of bags so after paying my bill, I slid the taco back into the bottom of the cart – the only place it would fit.

I took only three steps outside with my heavy cart, which placed me smack in the middle of the main drive for ALL THE CARS. And that’s when it happened.

My taco. It got caught by the wind, got whipped right out of the bottom of the cart, and began tumbling across the parking lot to the north. The wind in Nebraska is something to brag about, and somehow at Walmart it’s always worse. I know this, and yet I still failed to protect my taco. {hangs head}

Within the course of only three seconds, my taco had tumbled many yards away from me. I didn’t give my loaded cart a second thought, but abandoned it and began chasing my taco. I had just paid $14 for it so you better believe I wasn’t going to let it get away.

As typically happens when one is trying to chase something that is blowing away, each time I almost reached my taco, the wind whipped it farther from me. This happened at least four times, carrying it almost all the way to the wide-open field beyond the parking lot. “I WILL NOT LOSE MY TACO! I WILL NOT LOSE MY TACO!” is all I could think of as I ran after the flyaway pinata.

Finally, it bumped into a curb which slowed it down just long enough for me to pounce. I grabbed that taco and hugged it close – you know – so it wouldn’t blow away again.

Relieved and significantly winded, my mind snapped back to the reality that my loaded cart still sat far away from me in the middle of the main Walmart driving area. Clutching my taco, I ran (or did whatever verb fits the description of a woman in boots hurrying toward a cart while hugging a large taco). Wishing for an inhaler, I made it back to my cart and began looking around to see how many car accidents I had caused or at the very least who might have found the entire lady chasing taco show extremely entertaining.

No one. Nothing. Nada.

This, on a busy Saturday at Walmart during the month of December. Not one person had noticed, moved my cart out of the way, or cheered for me as I chased my taco toward the cornfield. Apparently people were too wrapped up in their own holiday preparations.

Or perhaps it’s more common than I realize that women chase their tacos through the Walmart parking lot. Hmm, I had no idea.