I decided this year to order the biggest bird I could find. It made sense. The local farmer I was purchasing from offered all free-range turkeys over 18 pounds at a flat rate. I told him I would take one of their biggest, and on delivery day, the hugest turkey I’d ever seen showed up on our porch.

This week, in preparation for our big Thanksgiving feast, I thawed Mr. Turkey so that I could get him baked and deboned. (Here’s my easy method for preparing the turkey ahead of time and re-warming it on Thanksgiving day.)  All was well until I got out my big roasting pan. 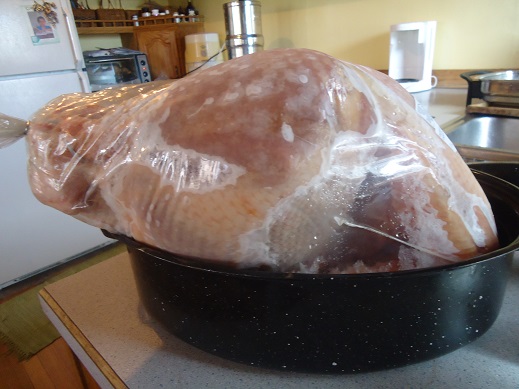 Uh-huh. I could actually hear the turkey laughing out loud at the very idea of me trying to bake him in what now appeared to be a very tiny pan.

No problem, I thought. I’ll just get out my large roaster oven. Surely that would be plenty big enough. 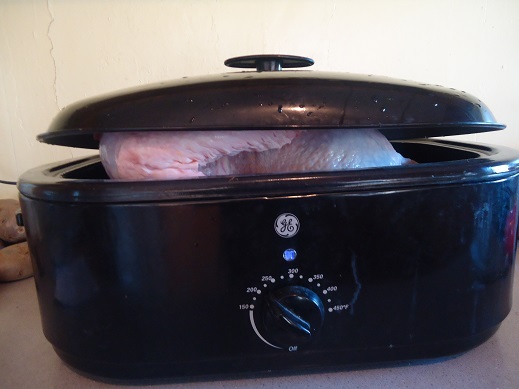 At least the turkey fit inside. But no way, no how was that lid going on. And a lidless roasting pan would not bake a turkey. Okay then. Plan C?

Hmmm, Plan C. Plan C. I had not foreseen the need for a Plan C. As I stared at the huge bird (who by now was rolling his eyes, shrugging his wings, and getting bored with the entire situation), I racked my brain for options. Go to the store and fork out money for….yeah right. Just a few days before the holiday? What would my store even carry that would be big enough to bake this bird?

It occurred to me that maybe I could bake the turkey directly on the oven rack, with a pan underneath to catch the drippings. I immediately recognized that this was a silly idea since I didn’t have a pan large enough in the first place, so all the drippings couldn’t be caught. I could just envision a dried out turkey with lots of drippings crusted all over the bottom of my oven. Not to mention the fact that when drippings drip in a hot oven, the coils can catch fire, smoke can fill a kitchen, smoke alarms can scream for way too long, houses can smell horrible, and Thanksgiving dinners can be ruined.

You realize all these thoughts went through my head in a time span of about 45 seconds? Nonetheless, I was practically waving a tea towel in front of the smoke alarm just picturing the entire scene.

I moved on to Plan Q – which involved texting a friend. I remembered that she had mentioned that she had an extra large aluminum pan at her house. I don’t love baking in aluminum, and I doubted that such a pan existed that would fit my gigantic-sized turkey, but I figured it was worth a shot. Within an hour, my friend arrived with two roasting pan options. One pan was tiny – as in, it was made for normal sized turkeys. But the other one? Well, I could have leapt for joy. That pan fit my turkey with several inches to spare! 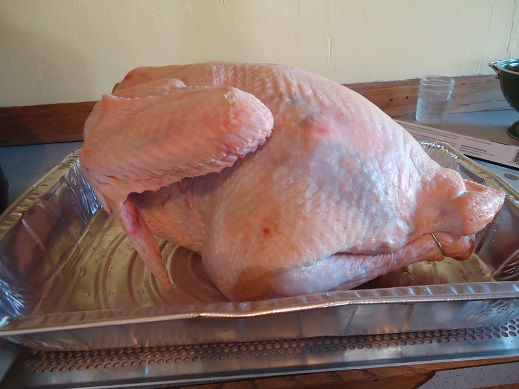 As you can see, the turkey feels exposed, being photographed in all his glory. He’s even blushing a slight pink. Here – I’ll cover him: 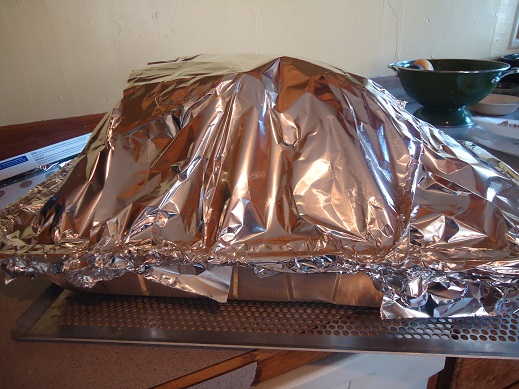 And into the oven he went. My friend saved the day. The turkey turned out tasty. And even though we’ll be feeding 15 people on Thanksgiving, I do believe we might have a bite or two of leftover turkey to enjoy in a sandwich this weekend.

Have you ever seen a turkey that big? Do you have any fun Thanksgiving preparation stories to tell?