It all began on Monday when I made burritos.

After lunch, there were a couple of burritos left over, which the boys grabbed to snack on in the afternoon. In the evening before we left for soccer games, Malachi carried his burrito plate back into the kitchen (from wherever in the house he had taken it?!) announcing, “Don’t anybody eat the rest of my burrito. I had my bare feet on it.”

Um. Okay. Feeling it was better not to know, I didn’t ask details as to how his feet made their way to his burrito. And besides, in this household, nothing much surprises me anymore.

In our haste, we left the half eaten burrito on the plate on the countertop and ran out the door to play some soccer. After we got home that night, we warmed up our dinner, ate, washed dishes, and got ready for bed. An empty plate sat on the countertop, so I called the boys in to see who it belonged to so that he could rinse it and put it into the dishwasher. Malachi quickly recognized it to be his plate from earlier. The problem was, it was empty. What had happened to the burrito?

“Dad,” Malachi hollered, “Did you eat the burrito on my plate?” Matt replied, “Yep, I saw it sitting there and figured it was free game.” The boys and I cringed and giggled at the same time. Apparently we’d all forgotten that Dad hadn’t been in the house at the time of the foot on the burrito announcement. Living in a house full of boys, Matt wasn’t really phased by what he had done. After all, what’s a little toe jam on a tortilla, right? Leave it to Matt to be a good sport. And really. What was he going to do? The foot-flavored burrito had already been swallowed.

The next day, Matt woke up alive and well, despite having ingested his son’s foot funk the night before. He proceeded with his day as usual, doing work on some rental properties and mowing lawns. His afternoon ended with a job trimming hedges for someone, then picking up firewood. Ready to head home, he stepped through some debris to make his way back to his truck.

As he stepped onto what he thought to be a pile of leaves, his foot came down hard directly onto a hidden piece of wood with two nails sticking up. The nails went through his shoe and into his foot. In serious pain, he worked to pull out the offending wood and nails. (This is the part of the story where I have to stop, breathe, and fan my face.)

Somehow, he drove himself home. Through the window in my office, I saw him hopping on his good foot and knew immediately something was wrong. After all, hopping on one foot is not usually how Matt comes home from working on a project. Usually he skips or trots.  (That was me trying to divert attention away from the pain of the situation. Did it work?)

I met Matt at the door, learned what had happened, helped him get cleaned up, and tried not to pass out. Blood, I can handle. Seeing my husband in pain and looking at nail holes in his foot just about did me in.

A call to the ER, salt water soaks, herbal poultices, clay, wrapping, propping – these wounds are keeping us busy. The pain seems to be a tiny bit less intense by now, thankfully, especially if he keeps his foot propped up on pillows. We went to the clinic to have it checked out today, and it seems that we’re on the right track for proper healing. 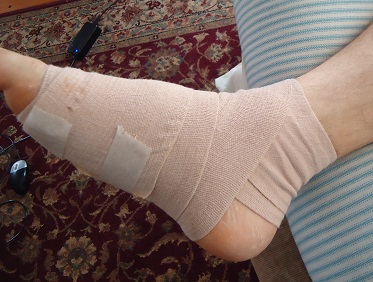 Bless my husband for being married to a blogger who thought it was a
good idea to take a picture of his wounded foot.

At first he was like, “You’re actually going to unwrap it and show it to everyone?”
Um, no. I’m pretty sure my readers don’t want to see the actual bottom of the foot.
He was kind enough to smile for the camera.

Our boys are amazing help, taking on much of what Matt would be doing today if he could be up and around. We are so proud of them and thankful for them.

As for me? I recognize my limits, so I’ve decided to drop kick the rest of my plans to do more freezer cooking this week. I figured you all could carry on the challenge without me, right? I’m thankful I at least got half-way through the challenge. And I’m incredibly grateful for all the food that is in the freezer right now from past challenges. Without it, I would have been struggling to put food on the table today. As it was, I simply pulled out some food I’d already made, warmed it up, and threw it on the table.

Pray for us, if you will. This could be so much worse, and we’re very thankful that it really is such a minor injury. But prayers for healing for Matt and extra strength for me as I pick up slack is appreciated.

I would say that Matt is tough as nails, but that just doesn’t seem as fitting in this situation. He is a tough one though. We’ll have him back on both feet in no time.

As for the burritos, I’m pretty sure Matt will ask a few more questions before finishing off leftovers on one of the kids’ plates in the future. :)