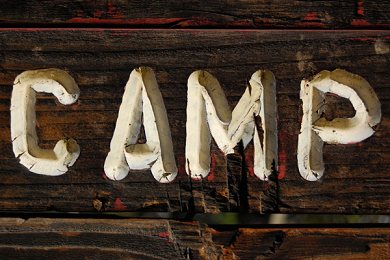 I grew up going to church camp every summer. I loved every minute of it and never missed a session, even going as a counselor once I was too old to be a camper. Then got married and I had kids. Changing diapers while swatting at mosquitoes was not my idea of pleasant motherhood, so I quit going. My husband continued to go each summer to teach Bible classes – something he is very gifted at doing.

Our oldest began going to church camp several years ago, followed a few years later by our second son. They love it so much ain’t nothin’ could keep them from going. We have seen so much spiritual growth in them as a result of their time studying God’s word out in the middle of His creation.

Through the years, several men and women whom I respect have told me that I should consider going to camp to teach. I always gave the “nod and smile” response. Camp? Not for me. I have kids to take care of, a website to run, and several other excuses that involve cleaner showers and fewer bugs.

In January of this year, our church hosted a Youth Rally in which teens from all over Nebraska (and beyond) came for a weekend of fun, fellowship, and worship. As I looked around the auditorium on Sunday morning at all of the teens, I was struck with the thought, “These are my son’s good friends, many of whom he is growing with spiritually. I don’t really know any of them.”

At that point, God gave me a nudge which said: “Go to camp.”

Ah, now that would be a great way to get to know these kids and to become a part of their lives. But I quickly reminded God that I didn’t do camp. That I sent my husband to camp to teach. That I sent my boys to camp to learn. That I prayed for people at camp. That I cheerfully washed dozens of loads of laundry after camp. But that I didn’t do camp.

He didn’t respond, which I now assume meant that he was just giving me the “uh-huh go ahead and try to talk yourself out of it and I’ll just be right here waiting for you to come around to obedience” face.

As I prayed that morning (while simultaneously listening attentively to the sermon of course) it didn’t take long for me to not only decide that I needed to go to camp, but to actually become excited about it. If that’s not a God thing, I don’t know what is.

Over the past seven months, God has taught me so much about laying my life down for Him. Each time I began to doubt that I would be effective in this role for Him, He reminded me that He always gives us everything we need, especially when He calls us out specifically.

All scripture is God breathed and is useful for teaching, rebuking, correcting, and training in righteousness, so that the man of God may be thoroughly equipped for every good work.  2 Timothy 3:16

So this week, I am at camp. I’ll be doing my best to keep up with my blog work while I’m here. There is wireless internet available here if I sit in just the right spot in the cafeteria and curl my toes just the right way.

I’d appreciate your prayers as God puts it on your heart. I’ll be teaching a girl’s Bible class each day while we’re here. Matt will be teaching a mixed (girls and boys) Bible class. Asa is a camper. Justus, Elias, and Malachi have agreed to work as “kitchen staff.”

Here’s to a great, full week of serving God and checking heads frequently for ticks!