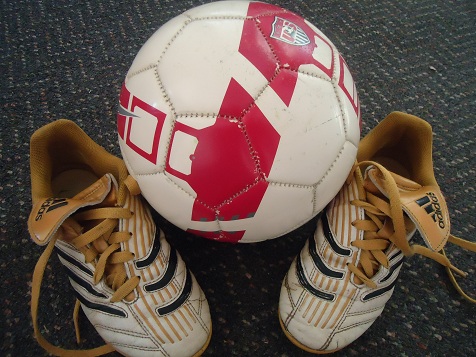 Fall is the season in which I live at the soccer fields. Our boys play soccer (all on different teams), our two oldest sons referee lots of soccer games, plus our oldest is now helping coach our youngest son’s team. Our sixth grader plays on an additional club team which occasionally plays in tournaments. My husband coaches some of our sons’ teams, plus helps coach our local college women’s team. As much as possible, we go to support both the York College women’s and men’s games. Did you follow all of that? Don’t worry, I can’t keep up either.

I absolutely love soccer and thoroughly enjoy supporting and watching and cheering. I am a soccer mom – it’s what I do. Here is what I’ve discovered about myself:

You know you’re a soccer mom when…you’re watching your six year old’s team get thoroughly creamed. The six year olds don’t seem to care too much about getting beat. They’re just working hard and doing their best. They run. They try to get the ball. They steal it from their own teammate. They kick it the wrong way. You keep cheering. You keep encouraging. And when finally, finally a goal is scored for our team, you find that tears spring into your eyes. What, you’re crying over a six year old soccer goal? Yes, because you’re a soccer mom.

You know you’re a soccer mom when…you decide after being at soccer games for hours and hours that you will just “rest your eyes” while sitting on the bleachers during half time of the fifth game of the day. The sun is shining brilliantly on your face, the music is playing in the back ground and you’re sitting on hard bleachers. As the teams take to the field again and get ready to begin the second half of the game, you realize that you had actually fallen asleep while sitting on hard metal bleachers. And surprisingly, you feel refreshed and ready to watch more soccer.

You know you’re a soccer mom when…that aforementioned brilliantly shining sun fries your face week after week and you have crease lines in your sunburn/tan where you were squinting to look toward the field. It’s cute. And even though you continue to get sunburned week after week, you continue to carry blankets, jackets, gloves and stocking caps in the back of your mini-van because you really just never know when you’re going to need them. You also carry in your purse a nice supply of water bottles, bandaids, kleenexes, and trash – because where else are your kids supposed to put the dirty kleenexes and bandaid wrappers? And yes, you have a big purse.

You know you’re a soccer mom when…you’re on your way to church, but instead of going straight on 14th Street to get to the church building, out of habit, you turn left at Nebraska Avenue and head toward the soccer complex. You finally realize what you’ve done about a block from the complex. You feel ridiculous, but hey, it happens to the best of us. When you repeat the mistake again three days later, you really being to wonder if you’ve lost your mind.

I am, through and through, a soccer mom. Can I get you a bandaid?