If I never hear or see another bottle being flipped in an effort to “land it” or “cap it,” that will be soon enough for me, so help my frazzled nerves. The bottle flipping craze lasted for 37 long days at my house, resulting in partially full bottles being left in various corners and under beds all over our house, and a mom who constantly said, “If you’re going to do that, you need to please go far away from me so I don’t have to hear it.”

As hobbies and fads go, bottle flipping was the least expensive ever known to man, as there was no purchase necessary so long as one held onto bottles previous purchased and consumed the contents therein. Score one for bottle flipping. Free entertainment for children everywhere.

Also, bottle flipping was harmless entertainment (though not according to my friend’s son who acquired a black eye from an unfortunate bottle flipping incident). Overall, if one had to select a trend for kids to become crazy over, bottle flipping wouldn’t be the worst choice. Sure I found it loud, nerve wracking, and obnoxious. Yet, I took a few turns and landed my share of flipped bottles, because if you can’t beat ’em, join ’em. 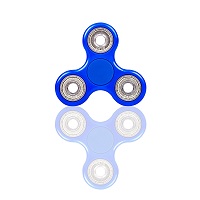 Then overnight I realized it’s been quite some time since I’ve seen a bottle poking out from under a bed or heard one being flipped as kids everywhere are spinning and fidgeting and fidgeting and spinning. The infamous fidget spinners are the latest craze, at least as of 12:57 pm, CST, May 27, 2017. Said spinners were created to help students with ADHD, but according to all moms, teachers, and child care providers – Fidget Spinners have now taken over the world.

Our youngest played with one at a friends house a few weeks ago, then talked of nothing else for 159 hours, reminding us of how hard he had been working lately to earn and save money so surely spending $4 of his hard earned dollars on this absolute necessity wasn’t too much to ask. Of course there were none to be found in our small town, so four trips to every store later, we ordered some online and had to wait impatiently for their arrival.

Even if all four of my sons is using one at the same time, the noise of these spinners is nothing compared to the jolt of a landed bottle flip – in my opinion and experience. Granted, I am not a teacher in a classroom so I have not had to deal with what some educators are facing with the spinners, God bless you one and all.

Regarding all things that fit into the fad category whether it’s fidget spinning, bottle flipping, dabbing, or whatever will become “the thing” five minutes after I publish this post – I have a few words to say to parents:

This too shall pass.

I didn’t love (understatement) bottles being flipped over and over and over right under my face while I was trying to concentrate on writing articles or help a kid with an assignment. But unless I had instructed otherwise, there was no harm done by bottle flipping – so long it was done far away in another room so I didn’t have to listen to it. My kids actually made some pretty fun competitions with them, and praise be, it was active and didn’t involve a screen.

Fidget spinners? They personally make me dizzy, but all four of my kids say they actually concentrate better while fidgeting, so spin away, my children. (But put them away while you’re at church or in Bible class so you aren’t distracting others or slowly killing your teachers.)

Dabbing? We’re already looking back at that one as a thing we all did back in 2016.

And can you believe overalls and high waist jeans have made a come back, even though I undoubtedly did my part to kill off these trends back in 1988?

What have we learned from these motherhood musings over fidget spinners and the like?

We’ve learned that all parents everywhere need to remember that some things are worth fighting over and some are not. If it’s not causing harm and it’s not sinful, we can probably chill out about it – though we can ask our kids to take the “fun” to another room so we will still remember how to smile.

We’ve learned that fads come and go as quickly as purple kool-aid hair. Therefore, it’s wise to guide our children in using discernment when making a purchase of the latest thing or tatooing it forever onto their left cheek.

We’ve learned that Laura landed a bottle flip a time or two, which makes us all impressed and proud.

And we’ve learned that dabbing mostly is out and overalls are actually back, at least for today.