I originally posted this three years ago after a “fun” incident with my friend’s roosters. Just in case you weren’t around then to laugh at me, please, by all means, allow me to remind you of my bravery and amazing rooster fending off abilities by re-posting this story. 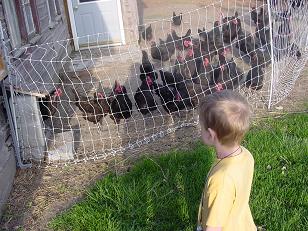 Aw, here’s Malachi looking at the chickens three years ago. He was so little. ;)

Last week, I was left in charge of caring for the animals on my friend’s farm. I am so very happy to report that I started out with 50 chickens and there are still, as far as I know, 50 chickens.

Before leaving to go out of town, my friend Susan walked me through all of the elements of chicken care: “Here’s the feed, here’s the hose for water – and by the way,”  she said, “If the roosters try to attack you, just whack them over the head with the feed bucket.”

If the what? The roosters might attack me? I’m supposed to what? With the feed bucket? Uh…oh…okay. That doesn’t make me scared or nervous at all. {cough}

Each day last week, the boys and I would go over to do chicken chores. The boys would gather the eggs while I would courageously feed and water the chickens. Each day I would scope out where the roosters were and make sure I stayed out of their way, because I really didn’t want to have to whack a rooster over the head. Not even a little bit.

Everything went fine and I had no rooster attacks to tell you about.

Until Saturday. I made it all the way to Saturday.

I had kindly filled the water…thingy. I had sweetly filled the chicken feeder with feed. I even smiled (albeit nervously) at the roosters in appreciation for leaving me alone all week.

And then it happened.

Not one, but both roosters simultaneously charged at me – at the same time – together.

But don’t you worry. I bravely jump-skipped into the air in shock and fear – and screamed something that sounded kind of like, “Aaahhhhhhh….aaahhhhhhh. Aaahh. Aah.” (Yes, because that will stop a rooster from charging.)

And I sorta swung my bucket and hit one of the roosters barely, which made him look at me like, “Seriously? Is that all you’ve got, lady?” In which I answered, “Yeah, pretty much. B-bye.” And I hightailed it out of that chicken coop.

It is a GOOD thing I’d already given those chickens feed and water, because my heart rate is still not back to a normal pace, and there is NO WAY I was going back in there that day.

I returned home unscathed – and I’m sure the roosters are now completely intimidated by my presence, what with my strong muscled bucket swinging and high pitched shouting.

It would appear that I was the true chicken. ;)

Three years later, I bet those roosters are still talking about me around the coop. “Remember that crazy bucket lady that Susan put in charge of us that week back in 2008? I can still remember the look on her face when we both ran at her!” And then they bawk and cluck hysterically and give each other “high five” with their wings.

But I’m okay with that.