Once I announced our new Real Food Recipe Makeover:  Heavenly Homemakers Edition feature, many asked me to come up with a substitute for cream soups in recipes. Well, I can check that one off my list right away, because I already have several options for cream soup substitutes that I can share!

The best part of replacing canned cream soups is that it can be absolutely SO SIMPLE! You can take some time to make homemade cream soup if you want, but if you don’t, there are a couple of very easy substitutions you can make that take no extra effort at all! 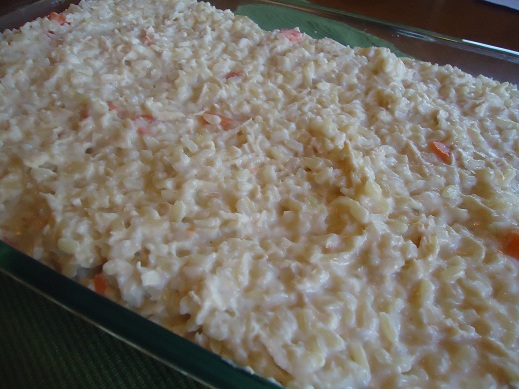 Add heavy cream instead. If a recipe calls for one 10 ounce can of cream of _________ soup, you can add one cup of cream instead. This is how I make Creamy Chicken and Rice Casserole. You won’t miss the cream soup at all!

Make Homemade Cream of Mushroom Soup. This takes a little more effort than the other two ideas, but you can make up a batch, use it right away, or freeze it for future uses! I use homemade cream of mushroom soup when I make One Dish Meat and Potato Casserole.

For any of these ideas, specificially ideas one and two, you may want to add a few extra herbs or spices to your recipe, since taking out the canned cream soup may also take out some of the flavor. But I have found that taking out the cream soup and replacing it with heavy cream or sour cream – I am then able to taste all the other great natural flavors in the casserole (chicken, vegetables, etc). The result is a fresh, clean taste.

Do you have some recipes that call for canned cream soups? Do you think any of the above ideas will work well as a substitute?

If you have a recipe you’d like for me to try and make-over, click here and fill out the form provided.