My apologies that it took so long to give you an update on what in the world my family was baking for me while I was shut into my office yesterday afternoon. As soon as the mystery dessert was finished baking, we headed out to play some “Mother’s Day Soccer”. My choice. As in, I actually chose playing soccer over taking a nap. Go figure.

By the way, if you would have told me a year ago that this year I would suggest that we play a family game of soccer in honor of Mother’s Day, I would have laughed. But indeed, now that I’m getting fit and learning to enjoy playing with my kids, I just can’t get enough. Soccer on Mother’s Day just seemed like the perfect idea. And it was.

So back to the dessert you’ve been waiting to hear about.

Oh, but another reason I couldn’t update you on this mystery earlier is because after we played soccer, we had a nacho and movie night – with popcorn. Yes, didn’t you know that it’s always good to have nachos and popcorn together? Eh, it worked and it made everyone happy.

We are pretty good popcorn makers around here, always using coconut oil to make delicious popcorn. But this time, we used a fun new recipe from the Deliciously Organic cookbook. It was fantastic. However, we did have a wild ride in the kitchen while I was making it because I didn’t use a big enough pot. You know what happens when you don’t use a big enough pot when you’re making popcorn on the stovetop? The popcorn just keeps popping, and the lid comes off the pan, and popcorn goes absolutely everywhere. Jen was over hanging out with us, and Matt was in the kitchen too – both of them being very supportive while I was standing at the stove feeling rather helpless while popcorn started overflowing and flying. Matt offered some suggestions. Jen handed me a bowl for the flying popcorn, but with it, I only managed to make a bigger mess. Oh, you should have been there to witness the madness. ;) 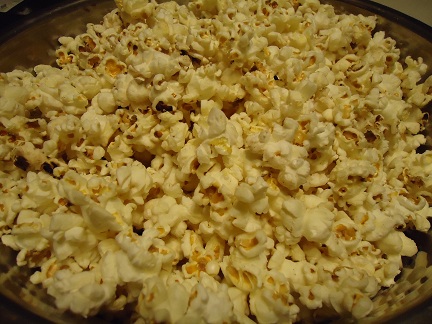 This is the popcorn that managed to make it into the bowl.

But really, back to the dessert you’ve been waiting to hear about.

If you can believe it, the dessert recipe they picked wasn’t chocolate. I know, shocking. But wow, was it good.

They picked a “Hot Milk Sponge Cake” recipe from my old, worn out Better Homes and Gardens Cookbook. Then, like good children, they figured out how to adapt the recipe to use healthier sugars, fats, and flours. Is that not impressive? More on that in another post.

So apparently that’s what all the beating was about. Sponge cakes take a lot of beating. Thus, the beaters were running for minutes on end. :)

Then, if you can believe it, they made a “Broiled Coconut Topping” to go on top. I’m telling you, they outdid themselves. Talk about tasty! 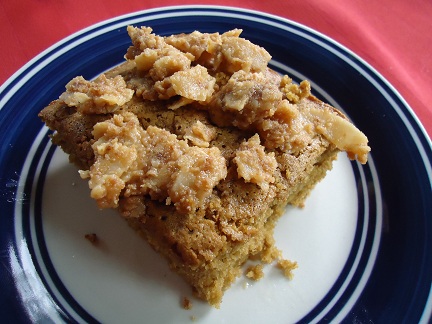