I’m not sure how you think about grocery shopping but here are the three main things I focus on:

But not in that order.

See, all of those are important to me when planning a menu and grocery shopping. We eat a ton of food at our house now, so cost is definitely a biggie to watch so that I can put the best possible food on the table without going over our already enormous grocery budget.

But I don’t want to compromise on nourishment just for the sake of keeping the cost down. And then there’s the time factor. Time to prepare the food and time to shop for the food. I find my schedule is so full now that I don’t have as much time as I used to for comparing prices, clipping coupons, price-matching, etc. I still do all of these as much as I can, but it sure does take time!

You know what else? I’m finding that price-matching has almost ruined me for buying produce full price. So guess what has started happening? Sometimes I don’t buy enough produce. Me. The one who preaches to everyone about eating lots of fruits and veggies eighteen times a day.

All of this blabbing to say – yesterday when I was grocery shopping, my “eat nourishing foods” won out over my “keep the cost low” arguments in my head. There are actual conversations going on in spite of me up there in my head. They go on and on (“whoa that’s expensive” vs. “dude, you need broccoli”); meanwhile I’m walking up and down the grocery store aisles thinking of our Christmas menu and making a mental note to reply to an urgent email when I get home and also I am wondering if I can make it home or if I should pee at the store before I leave.

No one. No one wants to be inside my head.

Seeing as my “eat nourishing foods” voice won out over my “keep the cost low” voice, today I decided to price-match the few produce items that were a great deal, and then buy a bunch more fruits and vegetables whether they were on sale or not. I did draw the line at strawberries. They were $5/pound and looked like they would taste like red Styrofoam. No thanks. 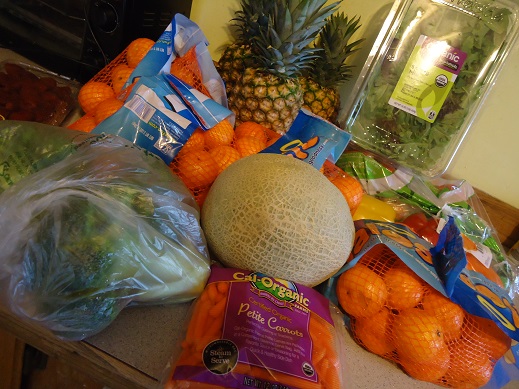 I got four bags of Halo’s for a super low price match (plus I had a coupon!). I got three pineapple for just $1.29 each because of price-matching. That’s where my savings ended. I’m over it though. My countertop looked so happy with all the fresh produce that my “eat nourishing foods” voice gave my “keep the cost low” voice a haughty little smack down. My “keep the cost low” voice gave a little shrug, but not before reminding the “eat nourishing foods” voice that ultimately she would be keeping our doctor bills lower so she wasn’t the ultimate loser here, thankyouverymuch.

So now would you like to hear about our new pet? (I know. It’s hard to keep up here. Voices in my head, produce on my counter, goldfish in my living room. Welcome to my world.)

I did not ask for a fish. Of course, I didn’t ask for a cat either. I never wanted any pets. But now there’s Wiggams, the cat, who has won us over with her catness – so much so that sometimes we take play-by-play pictures of her catly activities. For instance:

Malachi went out to feed her one morning, but dropped the bag. (I write fascinating stories to keep you on the edge of your seat.) 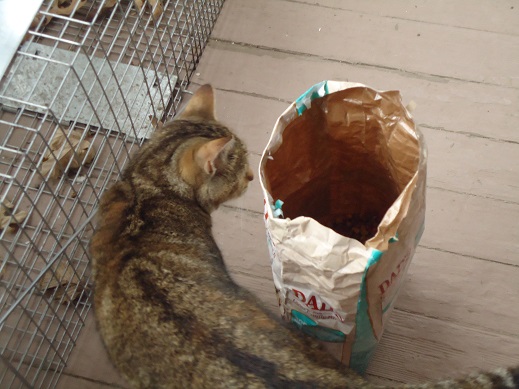 Wiggams considered that perhaps she didn’t need food scooped into a dish this time. 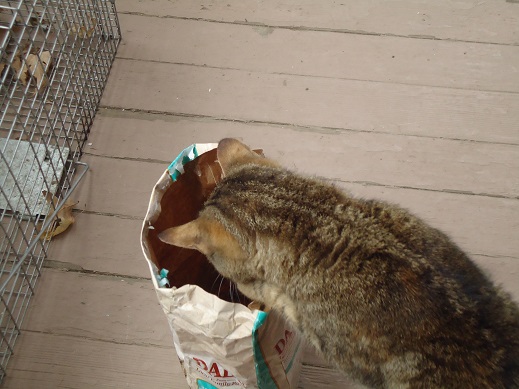 Indeed. Step back everyone. She’d take it from here.

So now. About the fish. It happened like this:

Last Thursday, Matt needed to go to basketball practice with Justus and Elias. I had Bunco with the ladies. This left Malachi, our 10-year old, without plans and all alone for several hours. I texted Asa (our college-age son) to see if perhaps Malachi could hang out with him on campus for the night. Asa said sure, except that he had a Christmas party to attend. No problem. Malachi would just go with him to the party. As a matter of fact, it was decided that Malachi would be Asa’s white elephant gift.

Therefore, while other college students were wrapping up odds and ends of candy and ugly sweaters for a gift exchange, Asa put a bow on the head of his 10-year old brother. Malachi was thrilled. 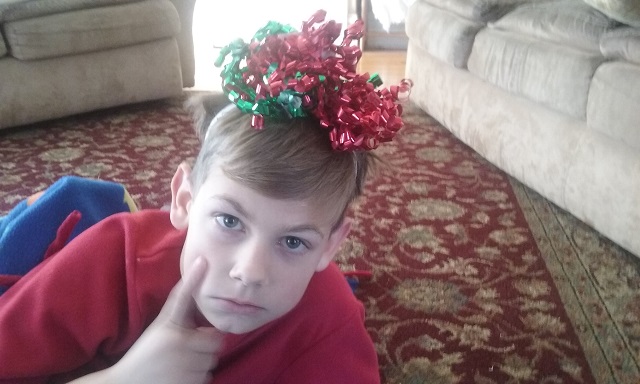 He was, as expected, a huge hit at the party! Everyone loved him and fought over him like all nice college students do during a gift exchange. Later that night, I got home from Bunco and let Asa know that I was available whenever the party was over. An hour later, he texted back that Brittany would be running Malachi home. I eagerly welcomed them when they arrived. But wait. What was this?

Brittany breezed into the house with Malachi and sat a small fish tank on my kitchen counter. “Merry Christmas!” said she. Um. Thank you? 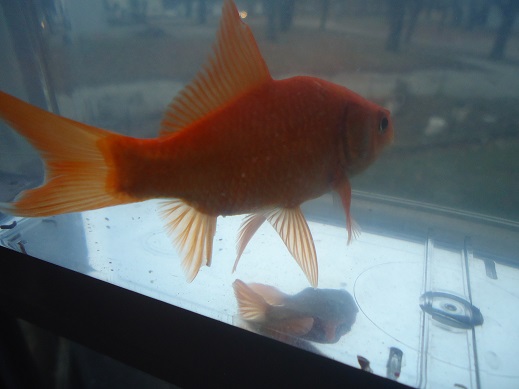 Apparently Asa wasn’t the only college kid to take a living gift to the white elephant party. White elephant; gold fish. It all makes sense I guess.

So now we have a cat…and a fish. (But not in the same location.) This pet accumulation thing has got to stop.

We began our fish care adventure by putting too much food in his tank and completely polluting his water. I take all the blame. I am, after all, used to feeding teenagers in bulk quantities. We quickly learned how to most efficiently change water in a fish tank without killing a fish. Later that day, Malachi eagerly reported that “Finnley is pooping!!” So we all got to watch. Whatever did we do with our time before we started having pets?

Have any fish? Have any cats? How many voices do you hear in your head while grocery shopping (cost low! save time! eat well!)?