Last night we all got to make our own personal pizzas, which is always a hit around here! I was smart enough (based on past bad experiences) to have all the toppings out and ready AND the crusts already rolled out in each pan. The time I didn’t have the crusts ready was a MESS! Little boys all over my kitchen had pizza crust rolled all around my rolling pins and crust with holes in it and crust in the bowl of pizza sauce, and raw pizza crust in their mouths.

SO, I learned to have a lovely rolled out crust in each  pan with all the ingredients on the counter ready to go and THEN call the boys in to make a pizza. 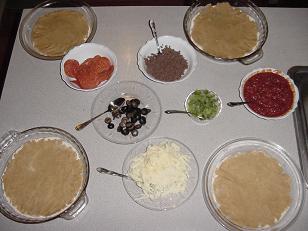 I called them all in and, count them there’s five, not four, boys in the kitchen having a blast putting their pizzas together because we had a friend over for the night. 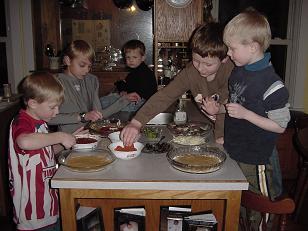 I forgot to take a picture of one of the boys’ pizzas, and do you think they really would have let me? They were TOO hungry! But, here’s a picture of mine. And just so ya know, it may look big in the picture, but it’s actually a tiny stone I got from Pampered Chef, not one of those you can bake a whole cake in. 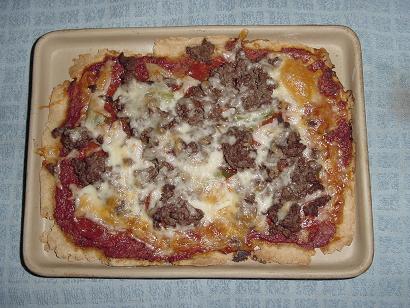 Here’s the recipe if you want to give it a try. The crust is very easy and very yummy.

any favorite toppings such as pepperoni, cooked hamburger or sausage, green peppers, mushrooms or olives.


Bake for 20-25 minutes until cheese is melted and turning golden brown.

This recipe is one featured in my “What to Do With the Kids in your Kitchen” ebook.