Last week, my three younger kids (17, 15, 12) arrived home from events of the day at 7:45 pm and a weird thing happened. We realized that we were all home and that the rest of the evening was free. 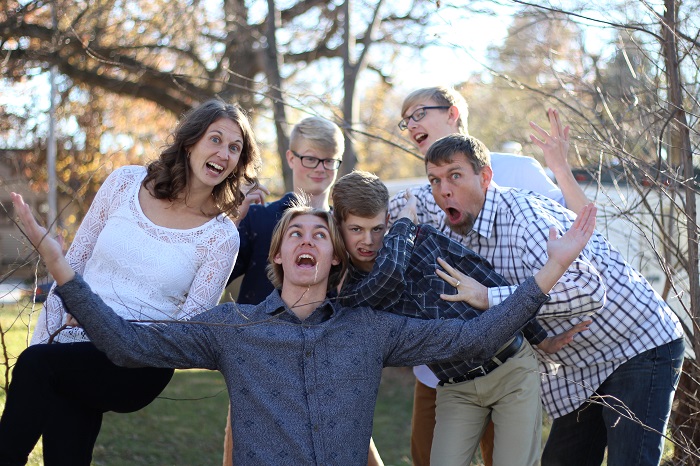 This happens so rarely these days that we all just stared at each other for a moment, trying to remember what we were supposed to do at a time like this. I thought going to bed early sounded like a good idea. But for some reason, no one agreed with me. Spoil sports.

We chose a movie to watch together but then everyone realized how hungry they were (as in, popcorn just wouldn’t cut it). As is the norm, they all looked at me. Unfortunately for them, I had clocked out of the kitchen, and most definitely forgotten which way was upright. From my comfortable position in my recliner, I offered hearty snack suggestions and said, “Go for it!”

Typically, my kids (who are awesome, but also normal) will choose the easiest options (like opening a bag of chips and a jar of salsa). But somehow, all three of them kicked it into high gear and decided to go all out and make a big snack buffet. Within fifteen minutes:

Matt and I made them get out the baby carrots and eat at least six each (because we care about them enough to be cruel like this). Malachi went all out and set up a table with juices and individual bowls of dipping sauce. 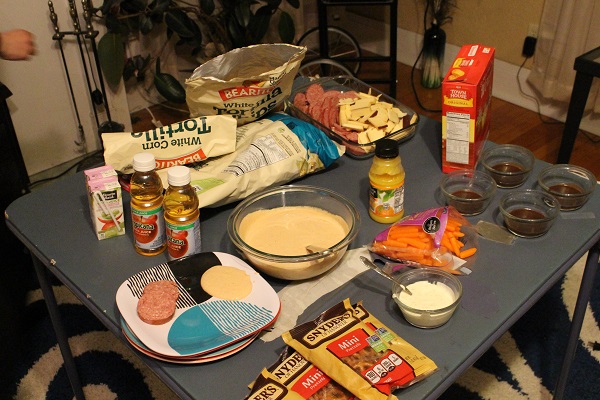 While all this was happening, I just sat in my chair and watched. After all, I’d put in my time that day. It was my turn to eat their food.

We fixed our plates, then the movie night began WHICH I STAYED AWAKE FOR – please be amazed and proud.

The next morning, we decided to make Super Mama Waffles (which means instead of just waffles and syrup, we have waffles with sliced berries and whipped cream). I loved the idea, but said, “If that’s what you want, I’ll make the waffles while you guys do everything else.”

Man, having kids that can cook is awesome. 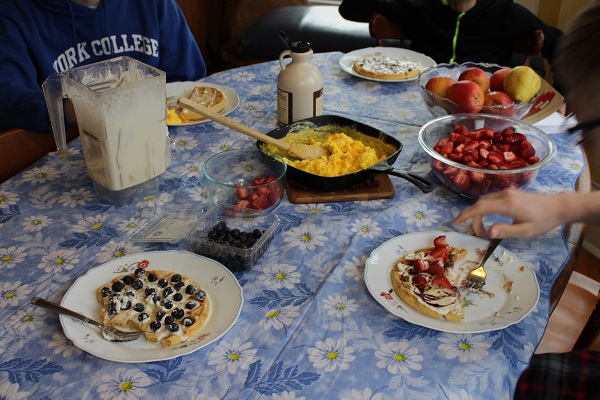 I promised if I took a picture of our team-made breakfast, I would not include their bed-heads.

Well, I say all this to once again encourage you to teach your kids to cook. Nothing they made here was difficult, but for me, the best part is that they are all at a point now that I didn’t have to walk them through how to make any of it.

Oh the years of taking them through all the cooking steps, reminding them to crack the eggs carefully over the bowl (instead of down the front of their brother’s shirt), and helping them understand the difference between a teaspoon and a tablespoon. I no longer cringe when they use a knife or the stovetop.

Young moms, you too can enjoy this some day. Eventually, they won’t just make messes. They’ll make dinner. (And messes, but let’s just focus on the dinner.)

For everyone with kids, no matter their age, I encourage that you work with your kids to help them get around confidently in the kitchen. The extra work it takes has a huge pay off in the end (so says the mom who sat in her chair while her kids made her favorite dips).

Pull your kids into the kitchen with you, as much as possible.

Help them learn. Help them appreciate the work you do to get food on the table for them every day.

If you’re intimidated about the whole idea, have no idea where to start, or just need a kick start – I highly recommend the Kids Cook Real Food course. We used it for Malachi, our youngest, because I really did need a kick start by the time this task came around to the baby of the family. He knew some basics, but he definitely needed to know more. However, I was in the middle of graduating our oldest and I was dealing with some personal health issues, so the KCRF course was just what I needed to help Malachi finally become confident in the kitchen and actually like cooking.

You can check it out here. It is incredibly well done.

Here’s some extra good news: I got my hands on a free All-Access Membership to Kids Cook Real Food that I’m giving away to one of you this week. Who wants to win? Sign up in the Rafflecopter below. I’ll draw a random winner on Tuesday, April 11. Watch for an email telling who the winner is!

Pssst! I just found out about this!

The creator of Kids Cook Real Food just came out with a brand new free download: 10 Snacks Your Kids Can Make! I just downloaded it for my boys. Go get yours!

Some of the links in this post are my affiliate links.