Trying to figure out what to do with all the zucchini? 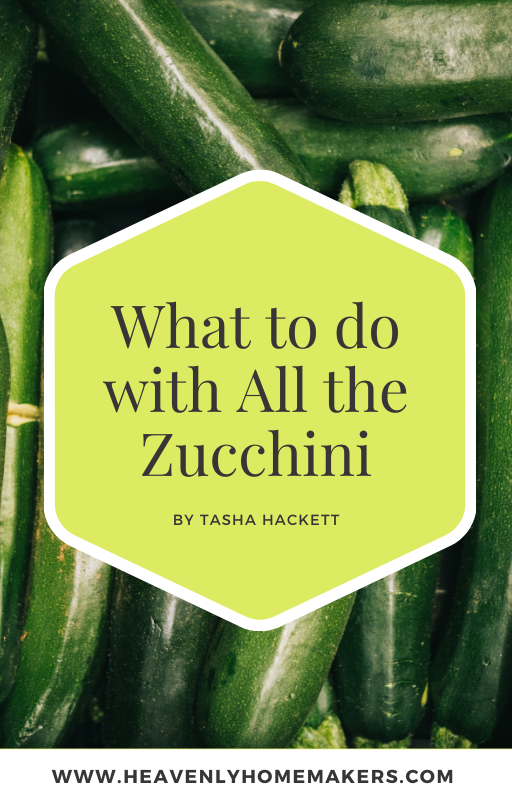 It’s zucchini season! I didn’t grow any this year. Sad. But other people did and around this time each year people are giving them away because when a zucchini plant does well, it does well. And when it doesn’t, we all curse the vine-borer grubs in unison and praise God for grocery stores and our friends who somehow fought off the nefarious and disgusting grubs. Ah-hem. Back to the yummy part.

What to do with all the zucchini?

Zucchini might be one of our favorite versatile vegetables. Here’s what I do with it:

Of course, Laura already put together many of her favorite zucchini recipes, but that was ages ago and you may have forgotten about it. Click through some of those recipes or search “zucchini” on this site for more great ideas. 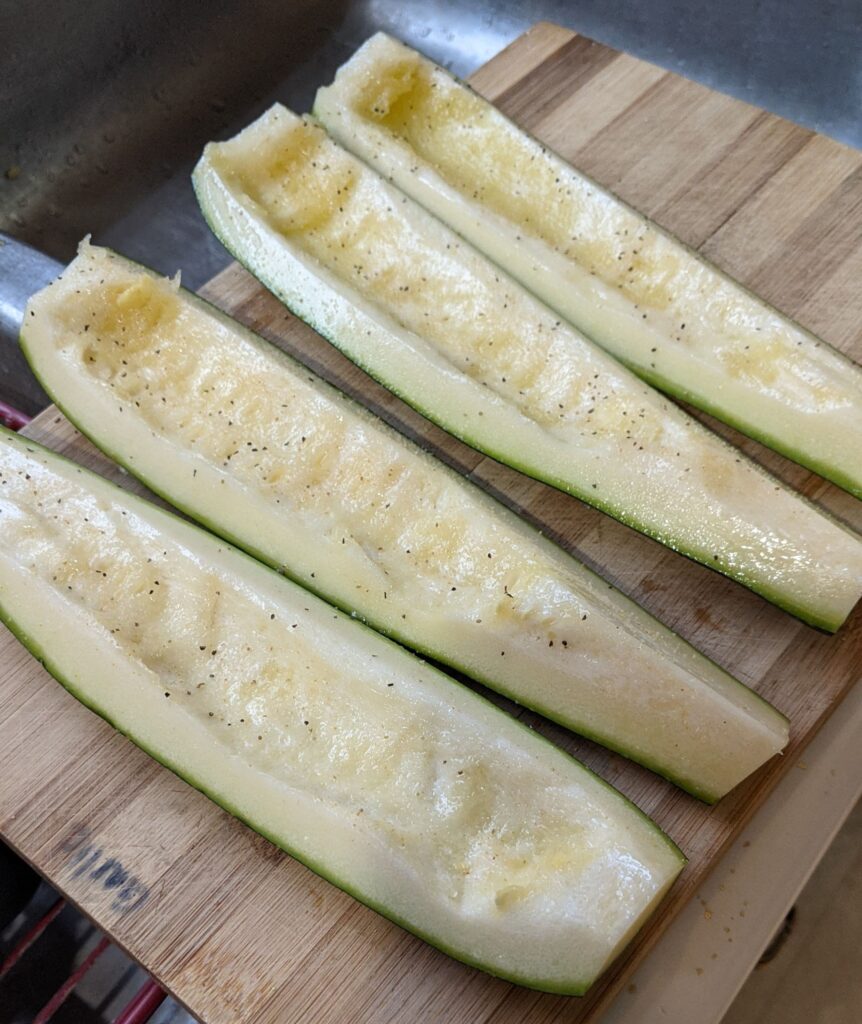 Are you a zucchini lover like me? I used to only be a zucchini bread (which is usually cake, let’s not kid ourselves) kind of girl. But then I grew up and realized that as a vegetable it can take on the flavor of butter and garlic and I do so love butter and garlic. Here are some great recipes for you to try as the zucchini crop comes in.

Finely chopped and baked over the nachos is a great way to sneak more veggies into this meal.

Frozen chopped zucchini will be a little soggier than fresh, but it holds up better than shredded, OR just add a few fresh ones to your frozen veggie bags.

This is a pumpkin recipe. I know. You can sub one squash for the other. It will be fine. Really. Many popular baked zucchini recipes have so much sugar in them they may as well be cake… try a less-sugar option and top with just a few drops of maple syrup, honey, or nut butter.

Have zucchini for breakfast!

Why have we decided that most vegetables are for lunch and dinner? Here’s a quick breakfast that I’ve made many times already this summer: In a hot skillet I melt butter, fry up a chopped summer squash (yellow or green), add in a can of chicken (because it’s breakfast and people are hungry for the food), salt and pepper and (here’s the secret ingredient), a tablespoon or so of lemon juice. You must not forget the lemon juice. Once the chicken is warmed and the lemon juice has sizzled for a few seconds, we eat and dance and go about our day warm and well-fed.

In hindsight, I will need to make that one into an actual recipe post for you. You will need to be reminded of it again because it is so delicious.

Do tell, what is your favorite way to eat this amazing and versatile vegetable?

Tasha Hackett is a friend of Laura and author of Bluebird on the Prairie, a historical romance set in an 1879 Nebraska town. Zeke has his sights set for California, but Eloise prefers the quiet safety of her home. Is it possible they’re both searching for the same things? Find this heart-warming romance wherever books are sold.

To find out more about Tasha and her world of historical fiction, connect with her at www.TashaHackett.com.

Did I just say our cat?

I don’t even know where to start.

Mostly I want to tell you about our garden, but what I have to share isn’t terribly exciting because most of our garden produce isn’t ready yet. (Yes I know it’s almost August. It’s a Nebraska thing. It’s also a Coppinger thing as we got our garden planted a little bit late this year. We blame this on the Nebraska thing.) So just pretend to be interested when I say, oh look – it’s a picture of green tomatoes that aren’t ready to eat yet. 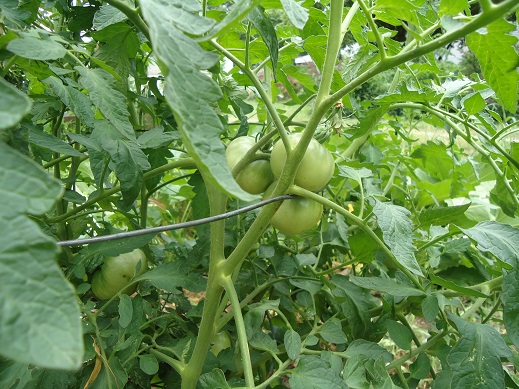 We do have a single yellow squash that appears to be an over-achiever. It got nice and big while we were away at camp, and while we wish it wasn’t so big and stringy, it will taste nice sliced and grilled along with some barbecue chicken. Otherwise though, there are no more squash ready. 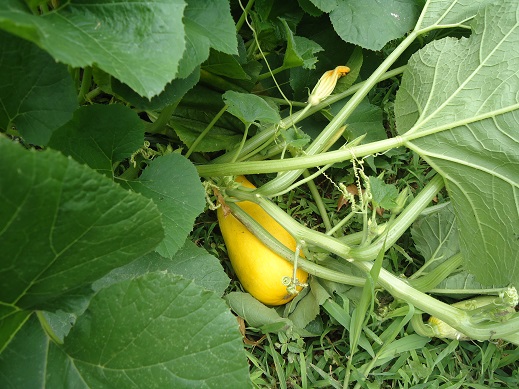 As you can hopefully see below, we have two tiny zucchini which will be ready soon. All the squash plants are full of flowers, so in a couple weeks I’ll be begging you to come take some off my hands. At the very least, you should share your favorite squash recipes with me. 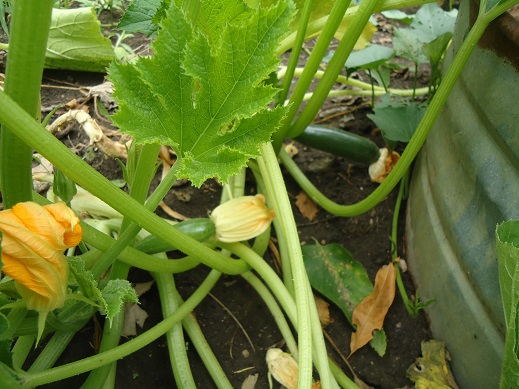 While we are lacking in abundant produce from our garden so far this year, there is one thing we are not lacking:

I am here to tell you that bunnies are not cute. Bunnies are naughty. Like wag your finger and tsk like your great aunt naughty. Would you look at this? 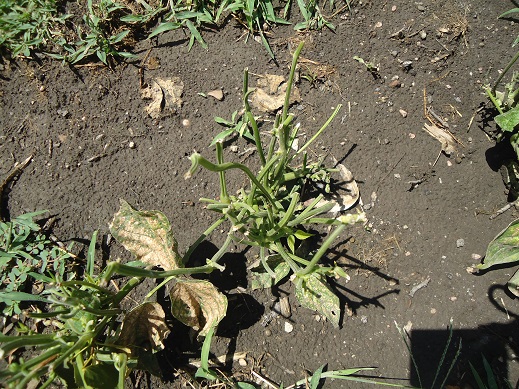 What is that in the picture, pray tell? That is a nothing. It was a green bean plant. But now it is a nothing. We have two whole rows of nothings. That is because all the bunnies (every single one of them in the whole wide neighborhood) held a meeting to announce that the Coppinger fam was doing this thing called church camp which means that they were not around to say “scat bunny!” for 14 whole days. They decided to get their party on. In our garden. Within our rows of green beans. Naughty, naughty, naughty.

We have about 1.5 green bean plants that just might survive, which of course will feed our family of six for two bites each. This leads me to tell about our cat.

So this cat. It showed up in our yard over the weekend all hungry and meowy and stuff. Before I knew it, my husband – my husband – was outside giving it some milk. Wha??? We know better than to feed stray cats, do we not? I think we do. “Why are you doing that?” asked the mother of many, many teenage boys.

He was doing it because he was mad at the bunnies.

Oh, well in that case.

No, but really. Matt explained to me (and I’m assuming he’s done hours of research on this) that bunnies do not like cats. Having a cat around might make the bunnies run the other way.

Being quite mad at the bunnies myself, I suddenly joined my husband in liking and wanting the cat.

Seriously, who is writing this? Like, want, cat, same sentence – I don’t even know who I am anymore. But I weighed the benefits. Bunnies eating all my bean plants or a cat rubbing its back against my porch rail? It’s a no brainer.

By the next morning, our ten year old had named the cat Wiggams (or Wigs for short) (or Wiggie if it’s being especially cute). He asked for string to play with it, and made it a home out of a cardboard box (because cats love this).

Then somebody else – who shall remain nameless – found herself scooping some pieces of chicken and tuna from the fridge onto a little plastic lid to put into the cat’s house, calling “here Wiggams” while doing so, because poor little Wiggie looked hungry and oh my goodness what in the world and who even am I??

So are you missing this cat? If so, call 555-BUNNIESARENAUGHTY. Trust that your cat is well fed but now answers to the name Wiggams. If you take the cat, you have to also take all of the bunnies. 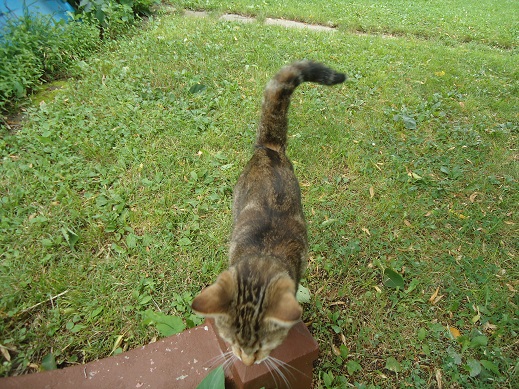 I learned that if you say “look at the camera” to a cat, the cat will not respond accordingly. It’s like he doesn’t even appreciate the tuna. Dude. Wiggams. Just look up for a second. 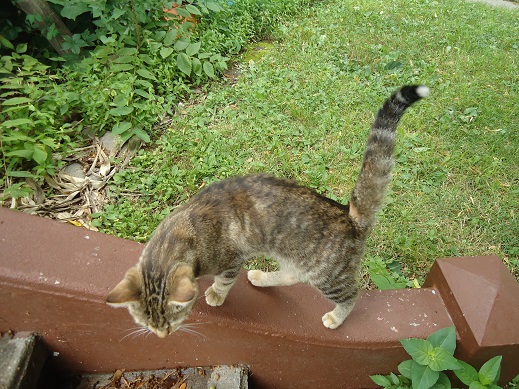 I suppose this story is “to be continued.” Stay tuned to hear more about garden produce and a camera shy cat named Wiggams. But not about fresh green beans -because bunnies are naughty.

The more nutrients you can stuff into one recipe, the better, right? My friend Emily tried this idea of adding shredded carrots into zucchini bread, then let me know that I should try it. Great idea. Mmmmm, so good! 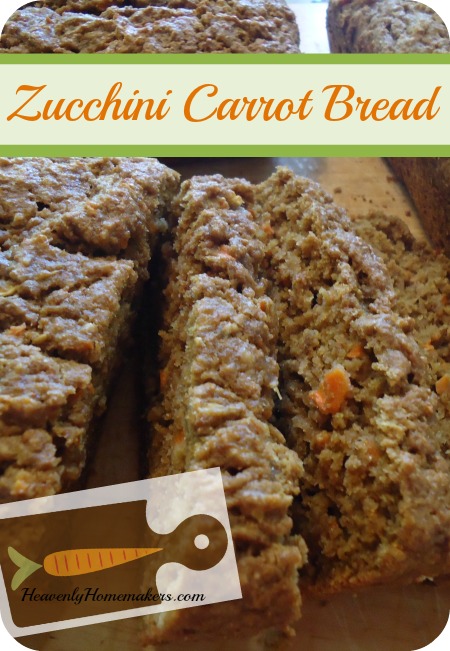 Slices of this Zucchini Carrot Bread would be perfect in your Make-Ahead Lunch Box! Simply allow the bread to cool, slice, wrap individually, then freeze. Pull a wrapped slice of bread out of the freezer, then toss it into your lunch box for a dessert or snack!

What other veggie combinations have you thrown together in quick breads?