Matt had been gone all day with the York College soccer team at an out-of-state game. The boys and I stayed home to get school work done, can tomatoes, and forget to put our shoes where they go. (It happens so regularly that I figure I might as well put it on our to-do list. “Leave shoes in the middle of the living room floor…check.”)

It was late-afternoon, right around Mom’s starting to get really tired and not able to make rational decisions anymore o’clock. The school work was all finished, the tomatoes were in jars and their lids had said “ping.” I was finishing some work at the computer and about to get up to start dinner. That’s when my eight year old asked the question.

“Mom? Can I make a ‘Welcome Home’ sign for Dad and put it on the front door and then can I turn the living room into a Lego Adventure Land by bringing all of my Lego platforms with the Lego guys and the clone bases down and set them up on the big white table in the middle of the floor {by the shoes we didn’t put away} so that when Dad comes home tonight he’ll be so excited and he’ll get to see all of the Lego Adventure stuff we set up and he’ll love it so much!”

With joy, I smiled and grabbed him up in huge bear hug and said that I could think of nothing better so please start bringing down every Lego we own and let’s also get out glitter.

But what I actually did in real life was give him a look which clearly stated, “Did you forget that it is now half past Mom can’t stand the idea of seeing one more mess?” And then out loud I was able to mutter, “Probably not but let me think about it.” Since that was so very nearly a “yes” he ran upstairs to start making Lego zip lines.

After dinner, he brought up his idea again, which had now developed into a bigger attraction since his original idea about transforming our living room wasn’t quite big enough and now the kitchen table and countertops needed to be included as well. Dinner had helped my mental state significantly, but no amount of protein can make me excited about turning 1000 square feet of house into a Lego Adventure two hours before bedtime.

Together we came up with a compromise. He could make the signs for the door. I would help. And he could use the kitchen table if he helped clear it off first and if he promised that I wouldn’t be finding Lego bricks in the butter two weeks from now.

I’m not sure I’ve ever seen him so excited. Some of his brothers even joined in. They set up the entire table with a Lego Adventure any dad would be pleased to see after being away from home, on the road, and in the hot sun for 16 hours.

Once the set-up was complete and we were headed to bed, Malachi grabbed me and squeezed the life out of my mid-section saying, “Thank you so much for letting me. That was so much fun. Dad is going to love it.”

I am happy to share that not only did saying yes to Malachi’s request bring him much joy, it didn’t even kill me a little bit. Perhaps I should get past my I love how creative you are but can’t we just this once sit down and read books quietly feelings more often.

The next morning, God and I were able to share our quiet time with no less than 47 Lego guys, some of whom were balancing on one leg even better than my yoga instructor. 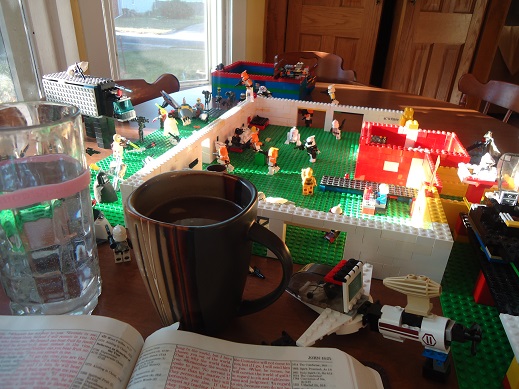 Matt had loved his welcome home – from the sign on the door to the Lego Adventure that made us all hold our breakfast plates in our laps as we ate together that morning. 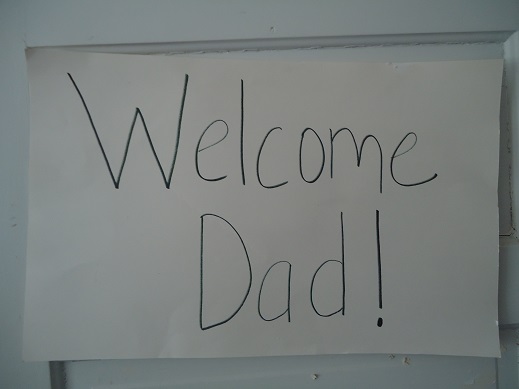 Would you look at that. We forgot the glitter.