I’ve been stubborn. I have not wanted to “go there”. And for Pete’s sake…I have 300 pounds of wheat in my storage room.

But our six year old, Malachi, seems to be getting worse instead of better lately with his eczema. This is SO disheartening. If you remember reading about his story, you’ll remember that he doesn’t just have just a “little bit of a rash diagnosed as eczema”. No, our littlest guy has always had a chronic form of eczema. He was covered head to toe for about the first three years of his life. From age three to now age six, the flare ups have at least been more tolerable, due in great part to all of the natural ideas we’ve tried to help his little body fight and become stronger.

But the past month or so, the rash seems to be tormenting him. It’s spreading back up to his neck. He scratches, he bleeds, he cries. Something has to give.

I don’t want him to need to eat gluten free.  I really, stinkin’, totally don’t. Which is why I’ve avoided this experiment for so long. But you know how God smacks us upside the head sometimes? I’ve felt Him doing that recently. First, Amy decided to go gluten free for a while to see if it would help her baby’s eczema. Then, my friend Danae was telling me about how she went Gluten Free and her rash cleared right up.

And Malachi has been so miserable at bedtime lately.

I feel like I need to do this for him. What if it actually helps? We’ve tried so many other things. What if this is the answer for him? What if he could be free of this misery?

And so…Matt and I decided to give it a try. It is our understanding that we need to try this experiment for a good six weeks in order to see if it truly is something that can help. We’re on day nine. So far, he’s not one bit better. But he’s not worse. So who knows?

Since I’m sharing my heart here, I’ll go ahead and tell you that I’m really, really torn when it comes to this experiment. I don’t want the Gluten Free Experiment to work. I don’t want him to have to avoid gluten for the rest of his life. I don’t want to have to cook differently for him. We already try to eat such a healthy diet…I don’t want to learn more and change more and work harder. I don’t.

But by saying that…I feel like I’m saying that I want Malachi to be stuck in this misery. Of course I don’t want that.  Which means that I really do want this experiment to work. I want this to be the answer. Except that I don’t. My selfish side wants something else to be the answer. Like the fact that the sun really is going to start shining more and he’ll be out getting Vitamin D which always helps. Yes, that would be an easy answer.

It’s not fun to sort out these feelings. And now I just spewed them all over you.

My guess is that some of you can relate. Am I making this too hard? Yes, I’m pretty sure I am.

Thanks to all of you who mentioned these great Gluten Free Websites. It’s so helpful to know there are so many wonderful resources available! And you’d better believe I’m pouring over the eBook my friend helped me put together a few months ago, Gluten Free and Good for You. Not to mention all the other great recipes Kim has thrown my way as we’ve been putting together more eBooks that will hopefully be  ready to launch soon(ish). 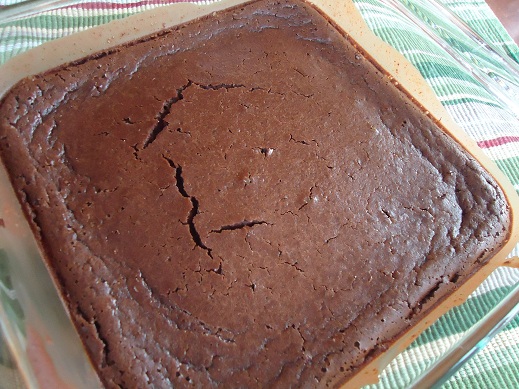 I even experiemented and made these Gluten Free Brownies
(made with black beans…don’t tell my kids!)
They really were quite tasty!

We can do this. I mean, if there are brownies involved…we will have the strength to do this, right!? :)

Thanks for letting me share. We just want Malachi to be better.  God is faithful.

I’ll keep you posted on how our six weeks goes. I may even share a gluten free recipe or two (sprinkled in with some wheat recipes because good grief…I do still have 300 pounds of wheat in my storage room.