If you recall, the past several weeks we have been conducting Gluten Free Experiment to see if taking gluten out of his diet would help our six year old, Malachi, get his chronic eczema under control. And if you also recall, I had quite a variety of emotions that went along with this experiment. It is so much fun to be an emotional basket-case.  Bleh.

Here are a few things we learned during the Gluten Free Experiment:

But the main thing we learned during our Gluten Free Experiment is that:  Eating Gluten Free did not help Malachi even a little bit.

Am I relieved? No, but yes, but no not really. Some answers would really be nice.

In the meantime, we took him back to our trusted chiropractor who has been helping us since Malachi began this trial as a baby. He’s helping to cleanse and strengthen Malachi’s liver, which seems to be showing signs of weakness again (this is something that seems to be the root cause of his eczema). As always, there is no quick fix, but we’re thankful to have a loving doctor closeby that cares for our children.

Also in the meantime, we learned of a Bio-Chemist in Wisconsin who has helped treat people with this, and other kinds of illnesses. While we’ve known for many years that eczema truly isn’t a skin issue, but the result of something going wrong inside the body, particularly with digestion…we’ve not really known where exactly to turn. This is one reason we tried the Gluten Free Experiment, to see if that would help his digestion.

We’ve been in touch with the Bio-Chemist and soon we will be going through her program, which is designed, by the grace of God, to heal Malachi’s digestive system so that all parts of his body can work properly and so that toxins can be eliminated the way they are supposed to be eliminated, instead of through his skin.

After six years, and a particularly trying few months, I can’t tell you how good it feels to have hope. This program won’t be easy, it won’t be cheap, but we don’t care. (Well, we do care, but you know what I mean.)  We just want Malachi’s body to heal.

And so, with that, I’ll say thank you to all of you who have emailed and left comments of encouragement. I’ll try to keep you posted as we go along with this and as I learn more. I’ll also ask you to continue to pray for healing for Malachi, and to praise God with us that we have hope and that He always provides the help that we need! 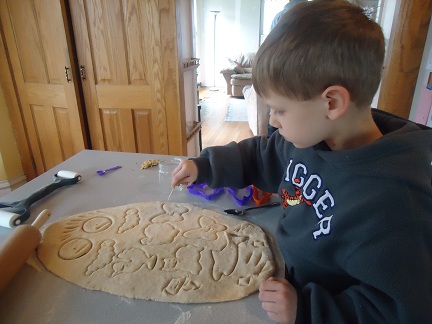