I’m curious…which of the “Natural Sugar” treats have you tried?

Nobody’s been complaining around here about the yummy snacks appearing on the table. (Or should I say disappearing from the table?!)

This weekend I made Krista’s Peanut Butter Raisin Balls, and one of my kids just kept coming back, saying, “Can I have another one?”

And I just let him…because there was no reason to limit him! They are so good…and so good for you!

And…just look at how cute they are! (Yes, I’m weird and think that sometimes food it cute.) 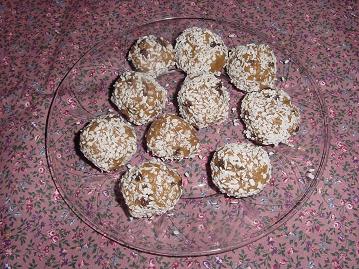 1 cup natural peanut butter (with salt), smooth or chunky
2 Tbs. to 1/3 cup honey (to taste)
2/3 cup raisins
2 tsp. carob powder or cocoa powder (optional)
big pinch of cinnamon (optional)
1/2 to 2/3 cup of unsweetened shredded coconut (divided) (You can substitute another form of coconut here, but it won’t be the same-this stuff should add a nice texture and crunch)

Mix together peanut butter, honey, cocoa and cinnamon. Fold in 1/3 of the coconut and all of the raisins. Chill thoroughly. Roll the mix into little balls. Roll the balls in the remaining coconut. You may need to roll them twice and press the coconut in a little. Cover them with plastic wrap or put them in a ziplock bag and serve them well chilled.

Krista’s notes:
I like these best frozen and thawed for about five minutes. :)  Also, I have never used the carob/cocoa or cinnamon and the taste was still great.

These were SOOO easy to make…I look forward to now saying to Asa or Justus, “Hey would you please go make some Peanut Butter Raisin Balls?”

(And then I’ll go do something else *like blog or somethin’* and they’ll go make them all by themselves!)

Also, I used very little honey…more like the 2 T. she mentioned, and that was plenty…because the raisins are so sweet.

Thanks, Krista for sending in the recipe!! Anyone else have a yummy “natural sugar” treat recipe to share? Email me with it!!

Tomorrow, I think we’ll take a look at some great smoothie recipes…YUM! We love smoothies around here!!

And one more thing…I haven’t asked in a while…

How’s everyone doing on the NO SUGAR Plunge?? Hanging in there? Give us all an update!

(In case you’re wondering how I’m doing…I’ve stuck to my plan:  Eat one “natural sugar” treat a day. With one exception…on Friday we had Justus’ birthday party a week late *that’s another blog for later this week*, and I made little chocolate cheesecakes at his request…and I ate one. And I enjoyed it and I didn’t feel bad about it. Other than that splurge, I’ve stayed true to the goal and I’m feeling GREAT!!)

(And it made Justus really happy that I was eating one…cause he was a little sad that I didn’t have any of his original birthday cake. I couldn’t make him sad two chocolate cheesecakes in a row, now could I?)