Remember that 500 pound order of hard white wheat I ordered and brought home a few weeks ago? (Yeah, like you could forget.) 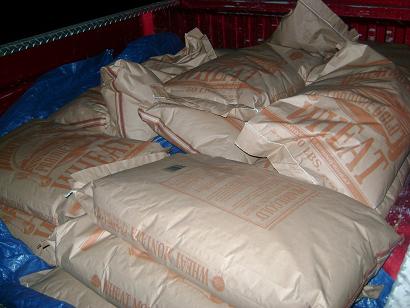 You may be happy to know that I’m down to only 447 (give or take) pounds of wheat now. And you were worried that I wouldn’t use it all up quickly…

Anyway, many of you asked how I would store all my bags of grain…and several of you suggested that I “critter proof” it. Yes. Very, very good advice. If it’s one thing I can count on having at my house…it’s critters. {shudder}  Although I don’t think snakes or birds should care too much about my wheat…we do see our fair share of bugs and the occasional mouse. Eeeww.  I do NOT want mice getting into my big stash of wheat. That would just be maddening.

And so, ever since I brought home all the wheat in February…I’ve been on a quest for big huge buckets for my grain storage. I needed some with lids that seal very well (obviously). The fabulous buckets with gamma seal lids I found online are pricey! Great quality, no doubt…but I needed around 20 buckets. I could have spent at least $80 for what I needed, and that was JUST the lid…not the bucket! Ouch.

One store asked me to “fork over” an entire dollar per bucket with lid that I took from them. Big buckets with lids for a dollar each? Okeedokee!

The other store practically threw their buckets with lids into my cart and wouldn’t let me pay one penny for them. They were almost giddy about the fact that I was so happy to take the buckets off of their hands. For free. Yes indeed.

And so…long story longer…I came away from my grocery store bakery departments with 20 buckets with lids for a total of $6.00. Yes, that was SIX dollars. Total. 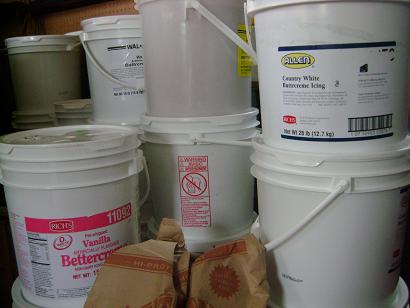 I washed and dried the buckets thoroughly, then got busy scooping all of the wheat into them. I found that it took two – five gallon buckets for each 50 pound bag of wheat.

And the critters? They can go pick on someone their own size.

Huh. I’m suddenly remembering another time I bravely and fearlessly used big buckets to defend myself from attack. Wow. Who knew buckets such as these would be such a helpful aid for a wimpy woman such as I. Between big buckets and cottage cheese containers…I’d say I am well protected. What do you think?