Now that we’ve realized how easy it is to add spinach to our meals, I think we’re working it onto our table at least once each day. The day these Spinach Tuna Melts were invented, Matt was the guy in charge of figuring out lunch.

We almost always have several cans of tuna on hand, our freezer held plenty of cheese, and I think it goes without saying that we had spinach in the fridge. Here’s what Matt came up with: 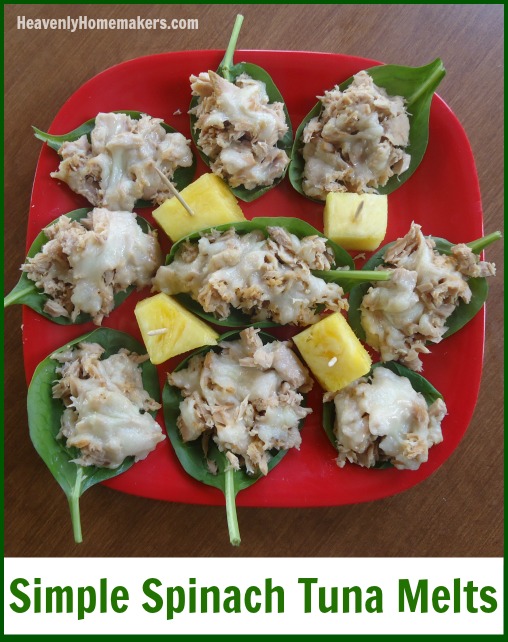 These were awesome.  I lost track of how many he had to make, as these are one or two bite tuna melts – and I’m not sure if you’ve seen our boys eat lately, but let’s just say they eat a lot of bites at each meal. We went through a lot of spinach, and not one boy complained that there was no bread involved in this meal.

How to Make Spinach Tuna MeltsYum

Open and drain a can of tuna. Use a fork to separate the tuna pieces, then place about a tablespoon on each leaf of spinach. Top with about a teaspoon of shredded cheddar cheese. Place prepared spinach/tuna/cheese on a baking sheet and broil in the oven for 1-2 minutes until the cheese is melted.

One 5-ounce can of tuna makes 6-8 Spinach Tuna Melts. If feeding teenage boys, open many cans of tuna and be prepared to make many pans of tuna melts.

So there you go! A super easy meal you can make that packs a big nutritional punch.

How are you doing on eating spinach? Have you found fun ways to work it into your meals?