This is a regular (albeit amazing) spaghetti squash recipe. It’s intended for all people, mankind, and sapiens. However, WordPress informs me that titles with uncommon words perform better. Sapiens fits the bill. Ha!

I’ve been eating a paleo diet for over three months! Simple meals are slowly making their way back into my life. I spent the first month floundering and relearning how to use my kitchen. The second month I discovered all the “junk” food I could make with honey and maple syrup and and ate an insane amount of homemade chocolate. But I’m rocking this new diet now. My crowd-pleasing, feed-the-people meal is either a ginormous salad with Almond-Orange Dressing or spaghetti squash. (Or both.)

The spaghetti squash topic has already been covered by Laura. 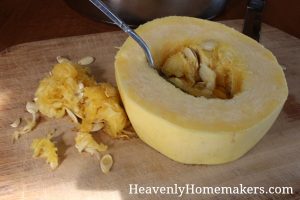 If you search on this sight you will find multiple spaghetti squash posts. Like how to cook it in an instant pot. (Highlights: Gut it. 5 minutes. Or leave whole and 20 minutes.) But, I had more information to share. I’ll see your spaghetti squash and I’ll raise you sausage. At first I was afraid this idea was too simple to even bother sharing, but after our great dinner last night with friends, they encouraged me to please share. Mostly because she wanted the “recipe.”

Make it now. Eat it later. It’s a no-fuss dinner.

Here’s how it went down. One morning I remembered I had a meeting scheduled at my house the next day. This meeting would last until suppertime. Therefore, I wanted to make something I could pop in the oven at four o’clock and then feed the delightful sapiens at five o’clock. No prep. No mess.

While I was overseeing third-grade math and language arts I baked two spaghetti squash in the oven (In short, slice in half, gut, bake “bowl-down” at 350* for 40-50 minutes. Or use the instant pot. Or bake whole and gut later). I chopped romaine leaves and other vegetables for a nice salad and put it all-together in a bowl in the fridge to be served with the amazing Almond Orange Paleo Dressing. Next, I cooked two pounds of pork sausage.

When the squash was thoroughly cooked, I pulled it from its shells with a fork. This next part is where it gets exciting. THEN I mixed it with the sausage and a can of pasta sauce and spread it all into a 9X13 pan. Done. Mostly.

The next day, I simply popped the pan into the oven and re-heated it at 350° for an hour. At five o’clock the smell filled the dining room and I remembered I had completely forgotten to extend the invitation to dinner to our friends. “Oh, hey. You guys wanna stay and eat with us? Dinner’s already in the oven. We’re having squash and salad and stuff.” Haha. Who could turn down an invitation like that? They stayed. A good time was had by all indeed. Especially by my four-year-old, who cleaned his plate and spent the majority of the meal explaining, in detail to fresh ears, everything he knew about dinosaurs. 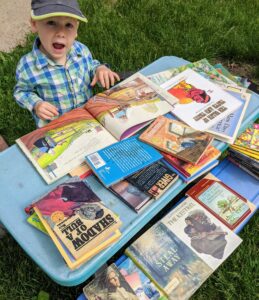 Simple meal prep is the best kept secret for the ease of serving other sapiens.

I want to be able to host and feed the people at a moment’s notice. When I first switched to paleo, I wasn’t able to do this. How could I bless others when I was following detailed recipes that included ingredients I wasn’t used to and only had enough on hand for four servings? After weeks of learning new skills, I’ve been able to put Laura’s good advice to work with my new diet requirements. I have pre-formed Salisbury steak (fancy burgers) in the freezer. I have riced cauliflower and shrimp on hand for quick and fun stir-fry. My fridge is usually full-to-bursting with fresh vegetables for snacks and salads because that’s fast food around here. Homemade chocolates, almond flour muffins, and green smoothies are a new staple. Whatever your diet needs, there are ways to make it simpler. I’m sure of it! 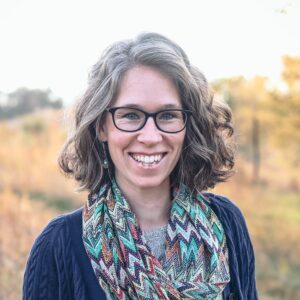 Have you ever given spaghetti squash a chance?

I double-dog dare you to make it for dinner this week. Only mix in some great sausage and pasta sauce and voilá: Simple dinner for the masses. Just to be clear: viola is a musical instrument (played by skilled sapiens). Because I already knew that, I did not *ahem* need to search the web for the proper spelling of the French term “to suggest an appearance as if by magic.” Ya learn something new every day!

Tasha Hackett, friend of Laura and author of Bluebird on the Prairie, a Christian historical romance releasing Spring 2021, is fueled by sunshine, paleo pudding, or hot chocolate—whichever is more readily available. Though she often pretends to be a ballerina while unloading the dishwasher, her favorite thing is writing with hope and humor to entertain and encourage women. Her time is spent with four chatty children and an incredibly supportive husband. They give her the kind of love people write books about. You can connect with her at www.TashaHackett.com or Instagram @hackettacademy